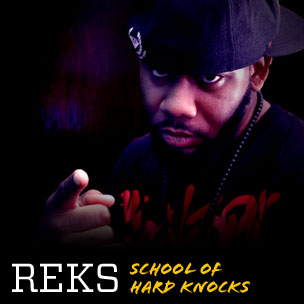 In the late ’90s during independent Hip Hop’s great uprising there was a solid line in the sand. You either wore a chain or a backpack. That may be a bit simplified, but the divisions in Hip Hop were much simpler a decade or so ago. The tree has continued to branch out further and further, genres have sub-genres and sub-genres have their own sub-genres. It is hard to see this as anything but a good thing, artists and crews have been able to carve out their piece of the game and connect with an audience that shares their tastes. Lawrence, Massachusetts native Corey Isaiah Christie – better known as REKS – is one of those artists.

Despite his tenure, REKS is continually viewed as a newcomer by many fans and journalists alike. His acclaimed 2008 effort Grey Hairs was not his first album, and his recent Rhythmatic Eternal King Supreme (R.E.K.S.)  most certainly did not come from a rookie. The (believed) 34 year-old emcee was a staple of the break dancing scene while growing up in Lawrence (as part of the Funk Town Connection), long before dropping his debut LP in 2001.

The funny part about the relative lack of acknowledgment of REKS’ past is that Along Came The Chosen wasn’t exactly under the radar. The acclaimed Brick/Landspeed Records release was nominated for Best Hip Hop Album at The Boston Music Awards and landed him a spot on URB magazine’s “Next 100” list. Shit, the album even had a top 50 single on the Billboard Singles chart (“Skills 101”). Along Came The Chosen featured the legendary (Edo G. on “Skills 201”) and a who’s who of up and coming independent rappers. “Final Four” was a massive posse cut featuring J-Live, Shabaam Sahdeeq, Esoteric, Lonnie B., Danja Mouf and Pacewon and Young Zee from Tha Outsidaz.

REKS was a part of the Boston region’s ascension to national recognition; the group responsible for picking up Edo’s torch and bringing in new fans that never knew “I Gotta Have It.” 2001 was a big year for Beantown Hip Hop. Edo dropped his first album in seven years with The Truth Hurts, Mr. Lif had just dropped his debut EP on Def Jux, Akrobatik had his own debut EP while 7L & Esoteric followed up the success of “Be Alert” with their first full-length effort. Not to be overlooked, Edan dropped one of the years best 12”s in “Mic Manipulator b/w Humble Magnificent” as well as “Drop Some Smooth Lyrics.” All of this was distilled down in Landspeed’s outstanding Home: Boston Underground Hip Hop, a compilation that featured all of the above artists. The title track featuring Guru’s indelible hook remains Boston’s anthem for many Hip Hop heads.

While REKS should have had his place alongside his peers as they anchored themselves as pillars in the underground community, he faded from memory. He dropped Rekless in 2003 on his own, and it came and went without much notice. By that point the indy scene was being run by Definitive Jux, Rhymesayers and Stones Throw and it seemed like outstanding material was required if you weren’t affiliated with either camp. Rekless was quality material, but it wasn’t enough to stand out from the pack. Fast forward five years and REKS was back on the scene.

Seven years previous REKS worked on his debut with a 19 year-old deejay and fledgling producer from his hometown. That young man now had albums to his name and his own label with a good stable of artists. Statik Selektah had become a force in Hip Hop, and Grey Hairs was going to get REKS back into the mix. Despite the title that referenced his years lived and his dues paid, Rhythmatic Eternal King Supreme was largely treated like a newcomer. His debut’s “You Ain’t Never Heard of Me” would have been just as appropriate on his third album (despite the double negative indicating that you have in fact heard of him). Some stellar production from DJ Premier, Large Professor and Statik to go with REKS’ furious pen game helped ensure that would no longer be the case. REKS wisely didn’t fall back after impacting with Grey Hairs, he followed up the following year with the iTunes-only accompany piece More Grey Hairs .

Nothing more needs to be said about REKS’ latest and best album that we didn’t say here. But one last thing needs to be said about REKS and the other artists like him who don’t get recognized as the veterans that they are. We live in a time where you can track down your third grade teacher and see what she had for breakfast. You can access a man’s life work in a matter of seconds with a few key strokes. There may be an overabundance of information at your disposal, but Googling a man’s name and checking out his discography or short bio takes a few minutes. Like Kris said, you must learn.

Jeff “J-23” Ryce has been with HipHopDX.com since 2000. A native of Ontario, Canada, J-23 has been an editor with the site for over a decade. Now an editor-at-large, Ryce lives and works in London, Ontario.