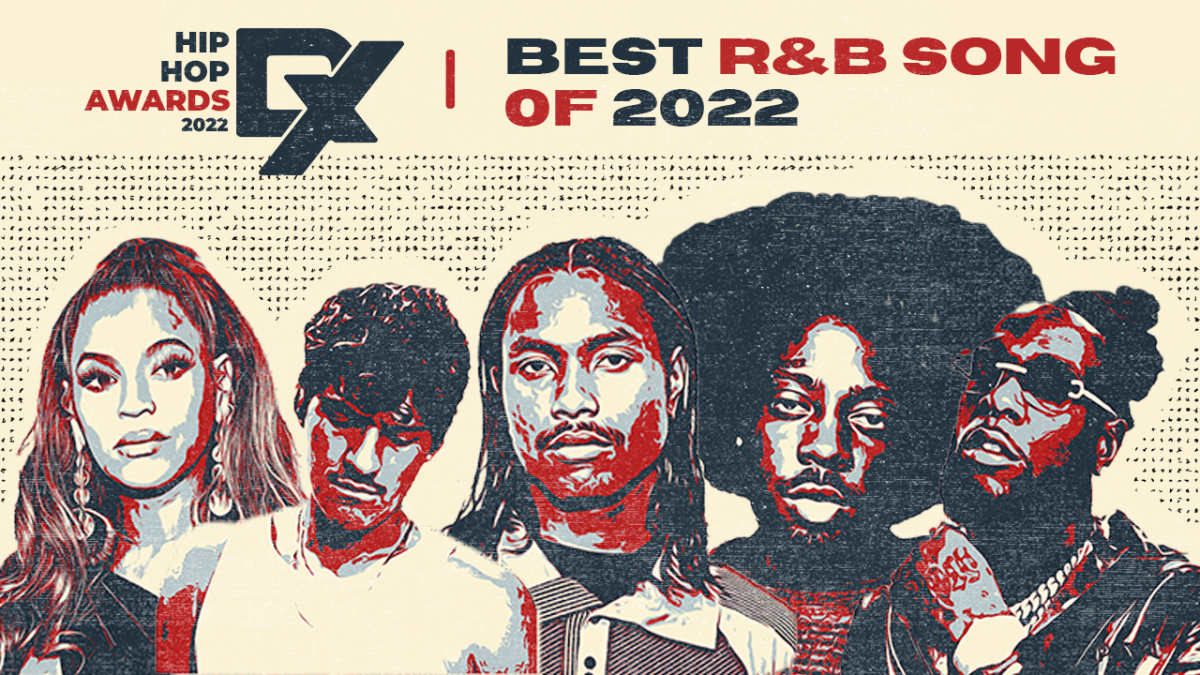 2022 in R&B offered a year of old favorites coming back into the fold and plenty of new stars primed to carry the torch into 2023.

Brent Faiyaz proved himself to be the next main draw, delivering several smash hits off his No. 1 album Wasteland. Burna Boy continued to take the world by storm with his mix of Afrobeats, Hip Hop and R&B. And, of course, we got two songs of the summer with Steve Lacy’s ode to what could have been, “Bad Habit,” and Beyoncé’s proclamation to quit your job, “Break My Soul.”

All this, plus notable contributions from veterans such as Drake and rising talents like Omar Apollo made for a great year in R&B, where the genre had crossovers with hyperpop, pop and Afrobeats. Without further ado, here are the nominees for the HipHopDX R&B Song Of The Year.

Editors Note: Selections were restricted to between December 1, 2021 to December 1, 2022. Nominees are in alphabetical order and honorable mentions are in no particular order. 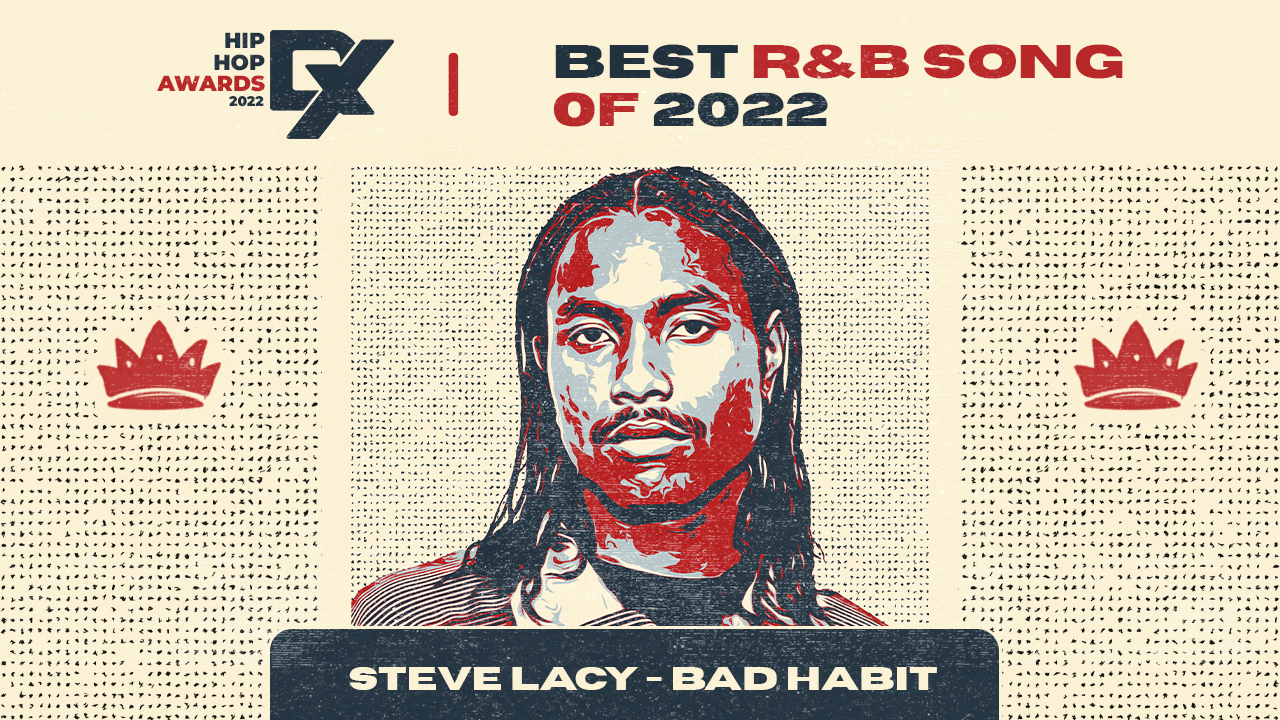 Steve Lacy hasn’t missed a beat since he debuted as a teenager with R&B collective The Internet in 2015. Since then, he’s cut a cool path from Grammy-nominated prodigy to a 24-year-old solo artist with collaborations with Kendrick Lamar, Tyler The Creator and Solange under his belt. Still, all of that seems dwarfed by the viral smash hit “Bad Habit,” a dreamy, sing-able indie pop anthem about a longing infatuation — fantasized or realized (which Lacy leaves ambiguous). The undeniable standout from sophomore LP Gemini Rights features all the angst, sarcasm and disarmingly charming honesty we’ve come to expect from the now industry veteran. Some of Lacy’s new fans might’ve entered his realm through the wistful “I wish I knew you wanted me” hook, but those who stuck it out would find an endlessly replayable track infused with his trademark earthy percussion, crunchy riffs and vocal dexterity. — Nina Hernandez

“All Mine” – Brent Faiyaz 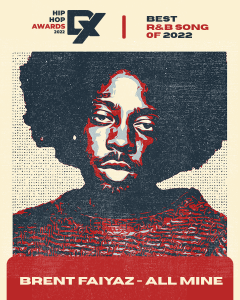 Despite not being officially released as a single, “All Mine” has emerged as one of the standout cuts from Brent Faiyaz’ sophomore album Wasteland. In what has become Faiyaz’s style, he delivered a slightly toxic response to love lost over an electronic track that’s melodically disorienting. Lyrically, “All Mine” has Faiyaz balancing grit, longing and an uncanny confidence to make up for any pain he may have caused the women in his life. The glitched, murky beat matches Faiyaz’s too-big-to-deliver claims (“If only I could pay my bills with my love for you / We’d be the richest in the fucking room”), as if the producer knows Faiyaz is saying whatever is necessary to get his girl back. But the arresting production coupled with his intoxicating warbling vocals makes it hard to resist. — Tai Saint-Louis 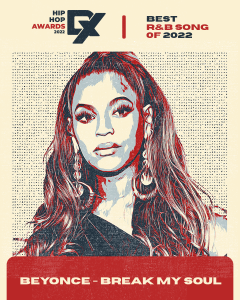 Beyoncé is one of the few artists in the history of music that makes the world stop whenever she decides to leave her Ivy Park-clad throne and walk to her studio, and her first song after a lengthy hiatus was no exception. Queen Bey set the globe ablaze with the Chicago House-inspired dance anthem “Break My Soul.” Reuniting frequent collaborators Christopher “Tricky” Stewart and The-Dream, and featuring a co-writing credit from JAY-Z, the compelling track is a clear departure from her work on the critically acclaimed Lemonade, showing wealth and status haven’t bred complacency. Sampling dance classics, “Show Me Love” by Robin S. and Big Freedia’s 2014 bounce track “Explode,” “Break My Soul” feels like a Queen’s lauded address, ushering in new era of Beyoncé’s reign. If you ever felt bound by forces from the outside, “Break My Soul” is a lesson that we are our own rescue team. No wonder people were inspired to quit their jobs. More than just a dance track, “Break My Soul” is a declaration of feminine empowerment and a celebration of a free Black woman. The ethos of liberation is captivating and mesmerizing as it is nostalgic and futuristic. — Rashad Grove 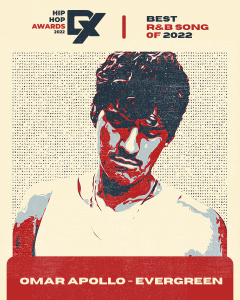 Between its nostalgic production — reminiscent of ‘60s R&B — and the reverb applied at the peak moments of the song, it’s easy to think Omar Apollo’s “Evergreen” is a sad song, an ode to a broken heart. But the hook and lyrics like “You know you really made me hate myself / Had to stop before I break myself” make it clear that the somber backdrop of the track is a juxtaposition, as Apollo celebrates breaking free from a toxic love. He even finds it within himself to wish the former object of his affection better luck in the future. In a year where toxic culture reached an all-time high, Apollo flipped the script, offering a mature and healing perspective, rather than beginning another villain origin story. — Tai Saint-Louis 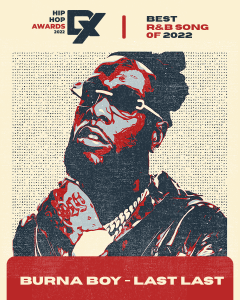 Burna Boy’s status continues to skyrocket across the globe as one of the leading Afrobeats artists, and “Last Last” is the embodiment of the movement that he helped spark. The hypnotic song, which samples Toni Braxton’s 2000 hit “He Wasn’t Man Enough,” flaunts Afro-pop sensibilities and Burna’s bi-lingual brilliance. Describing the creative process of “Last Last,” Burna Boy spoke candidly about the personal nature of the song. “That’s how I like to sign all my letters, because I didn’t know the proper [signoff],” he said. “It’s a bit personal [because] it’s bringing you into my head on my birthday — when you turn 31 and ain’t got no kids, everything is going good and bad at the same time. You reflect and then you get as lit as possible. Then you sleep and wake up and reflect again. I’m reflecting on everything — what I’m doing and what’s happening where I’m from.” Burna seamlessly switches from English to Yoruba as he sings about the pain he encountered over love burned to the ground. With a deep pathos, Burna Boy compels us to feel every emotion that he’s experiencing, showing heartbreak is a universal language. Capturing the African genius at his most vulnerable and powerful, “Last Last” is a takeover moment, a track that when the music history of 2022 is written will be an essential part of the conversation. — Rashad Grove “If I Get Caught” is without a doubt the most toxic song of 2022 so far, and it’s not even close. Even JAY-Z, who cleared a sample for the song, said he was shocked by the lyrics. There are people like Giveon and Brent Faiyaz who have some extremely toxic lyrics within the R&B space, but with this song, dvsn decided to be as blunt as possible with their gaslighting. That being said, the song has one of the catchiest hooks in recent memory so don’t be surprised if you hear some women singing this one. And for the guys out there who are thinking of apologizing to their girls for infidelity, this seems like it could be the new anthem. — Jeremy Hecht Shock drops aren’t new to Drake; one need only look back to 2021’s Scary Hours 2 EP to find an example. But when the Toronto megastar surprised the world with a new body of dance music with Honestly, Nevermind, the Hip Hop universe scratched its head. Love it or hate it, the EDM-inspired sounds of Drizzy’s latest wormed their way into every nook and cranny of popular music. Among the tracks is “Massive,” a four on the floor anthem which sounds closer to his 2016 album Views than anything from last year’s Certified Lover Boy. Produced by Gordo (formerly known as Carnage), Richard Zastenker and Klahr, “Massive” features an intoxicating drum break and playful synth work, which forms a perfect canvas for the 6 God to passionately ruminate over a distanced lover. — David Brake Cruel Santino makes music that lives for the sunshine. His blend of Hip Hop, R&B, pop, dancehall and a host of other genres evokes the image of spring flings, summer cookouts, vodka lemonades in the park and boozy brunches at an over-crowded rooftop. “Born Again” was made for portable cheap speakers and blunt rotations on the lawn. Santi’s echoing Auto-Tuned vocals sound sun-kissed, as the subtle guitar riff rings across the track. Amaarae breaks up the pleasantries with a high-pitched, Playboi Carti-esque baby voice verse, spinning the heads of listeners with a fast-paced flow and hopping in and out of Spanish with ease. The song fading out is like when the sun sets overtop the mountains; it’s beautiful but sad. But unlike the sunset, listeners can rewind the track, making “Born Again” a staple for the Spring Fever playlists, even after the temperature drops. — Josh Svetz

“Please Do Not Lean” – Daniel Caesar 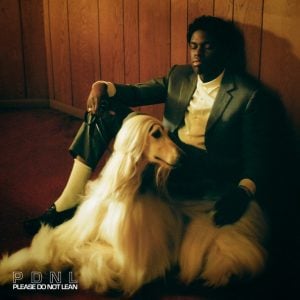 After a two-year hiatus, Daniel Caesar enlisted fellow Canadian act BADBADNOTGOOD to deliver sweet, melancholy vulnerability with “Please Do Not Lean.” The song finds Caesar crooning his verses over nothing more than a piano riff, allowing his voice to shine through. However, part of the vulnerability in the song is found in the Canadian singer sounding like he’s almost holding back, before exploding on the hook with the full backing of the band. In addition to the lush instrumentation interwoven throughout the song, “Please Do Not Lean” hears Caesar implementing more traditional vocal elements, giving the song a familiar feeling. But moreso, it’s a track that depicts Caesar’s deep understanding of himself and the burden of carrying the weight of another person, hitting a breaking point as the song climaxes. As he gears up for his next album, “Please Do Not Lean” teases the maturity Caesar may have undergone, learning when it’s time to let go. — Tai Saint-Louis 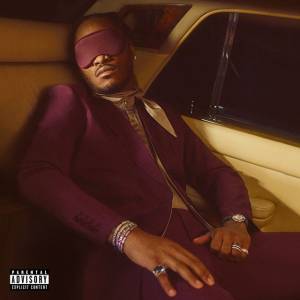 Much ink has been spilled over rappers’ distinct brands of toxic masculinity. But at their most charming, Drake and Future come off less like sexist jerks and more like lovable cads, imperfect men who change their ways by the end of a 90-minute romcom — provided they meet the right woman. On “WAIT FOR U,” Future’s voice is hushed, a drunk murmur across telephone wires home alone late at night. “When I’m loaded I keep it real,” he says, because he’s scared to be vulnerable sober. Not an admirable confession, but an honest one. Future’s candor inspires the same in Drake, who consistently produces his best work when a woman leaves him feeling genuinely tortured. “Tried to bring the best out you guess I’m not that influential / Guess I’m not the one that’s meant for you,” he sighs dejectedly. Even men who have it all don’t get everything they want. — Vivian Medithi

Return to our Hip Hop Awards nomination page for more categories or check out the nominees for R&B Albums of the Year, Comeback of the Year and Rookie of the Year.

Check out our previous R&B Songs of the Year award winners.