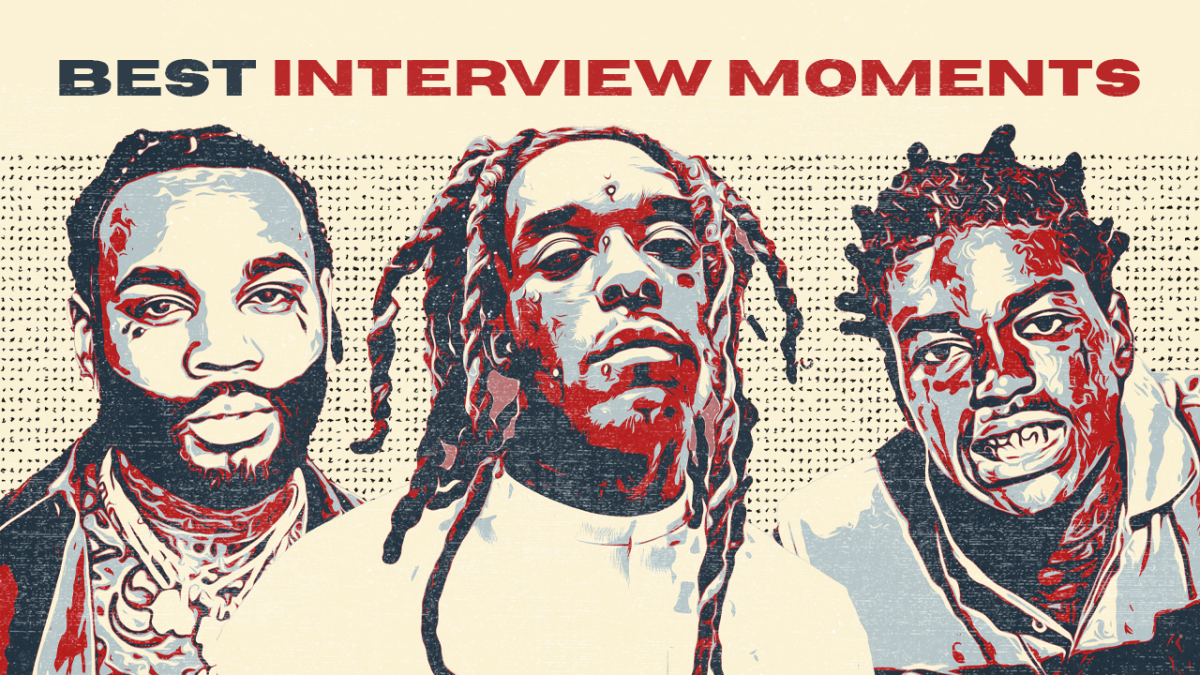 Whether it’s a sit-down conversation or a red carpet question, there are many factors involved in a great interview. Part of it is preparation, and part of it is the ability to connect with an artist, but there are certain interview moments that couldn’t be scripted even if we tried.

From spontaneous rapping between spouses to an education on Pop-Tarts, these were some of our favorite HipHopDX interviews moments of 2022.

Seeing more and more artists age gracefully in Hip Hop is always heartwarming, but seeing rappers give back to the kids is even more inspiring. Snoop Dogg is the one man in the history of the world who can literally advertise for any company — from beer to car insurance — and still remain himself.

So it’s no shock that when he stepped into the world of children’s television with Doggyland, he was able to remain true to his character (minus the weed). When Snoop’s Mount Westmore colleagues stopped by our office, we asked Ice Cube, E-40 and Too $hort to react to his children’s affirmations — and you can tell that the support was genuine.

Check out the full Mount Westmore Interview and some other clips below.

Meagan Good is a staple within Hip Hop culture, from her roles in movies and music videos to references in song lyrics. At the premiere for Netflix’s Day Shift, the actress picked her favorite rap references, including Tierra Whack’s song with her name as the title. Meagan also reflected on her cameo in Memphis Bleek and JAY-Z’s “Do My…” music video, revealing she had to rely on her acting skills to make the golf scene look convincing.

Whenever we’ve interviewed The Game, there are always interesting stories. Whether it’s his Michael Jackson story or something about 50 Cent, it’s never a dull moment. But maybe the most random story came from our latest chat with Game, where he told a story about stealing Tyler, The Creator’s skateboard. Tyler, if you’re seeing this, just know we have no further information about the deck’s whereabouts.

7. Jim Jones Was The Hater Maino Rapped About

When DX‘s Head of Content Jerry Barrow sat down for an interview with Jim Jones and Maino, the energy was electric. One moment that stood out was when Capo confessed to being a hater when he first heard Maino’s music, specifically the song “Hi Hater.” Try watching this clip and not smiling.

6. T-Pain’s Warning For All Artists

This one was less of an interview and more of a sneaky backstage moment after T-Pain finished performing to give him his flowers as an artist. But Pain’s reaction was so priceless that it had to be included in the list. He also gave us a hilarious answer when we asked what song he would perform for the rest of his life.

Sometimes fate aligns for the perfect interview moment. DX’s Manager Of Video Jeremy Hecht’s birthday happens to be the same day as Kodak Black‘s, so when he showed him his ID, his face instantly lit up and he greeted him with: “Okay then, what’s up, twin?” This then led into a hilarious interaction about white people, J. Cole and birthdays.

Lil Uzi Vert is the type of guy who gets excited about the little things in life. Whether it’s watching his girlfriend perform or winning a game of basketball at the local park, Uzi’s excitement is contagious. But there is nothing that Baby Pluto loves in life more than Pop-Tarts.

So when he walked by at the 2022 BET Awards red carpet, there was only one logical thing to ask him about. What resulted was a level of expertise that not even the most veteran Kellogg’s workers could attain.

There is nothing better than witnessing genuine love between two people who admire each other’s craft. Papoose and Remy Ma had one of the most wholesome interview moments this year when they rapped each other’s favorite verses. Seeing the look on Remy’s face let us know that she had truly never heard her husband rap those bars before.

2. Kevin Gates Takes Us On Spiritual Journey Through His Mind

There are certain interviews that feel more like a vessel of messaging rather than a conversation, and Kevin Gates was one of them. Throughout the hour-long conversation, Gates dove into the depths of his spiritual journey and spoke about love, loss, growth and everything in between.

One look through the comment section and you’ll understand what this conversation meant to people. One fan said: “I cried thru this whole interview, I could feel his energy and the truth he speaks.” Another viewer wrote: “this ain’t an interview. This is a conversation, that just so happened to be captured. Energy meeting energy, is a beautiful thing.”

1. Wiz Khalifa Reflects On His Journey To Superstardom

While our documentary with Wiz Khalifa wasn’t strictly an interview, much of the storyline started as an hour-long interview with the Taylor Gang rapper. He told the story of his come up and the trials of remaining true to his core while dealing with pressures from labels, fans and the outside world. This was one of the most memorable moments of the year and hopefully a story that will inspire people in generations to come.

Some of Our Other Favorite Interview Moments