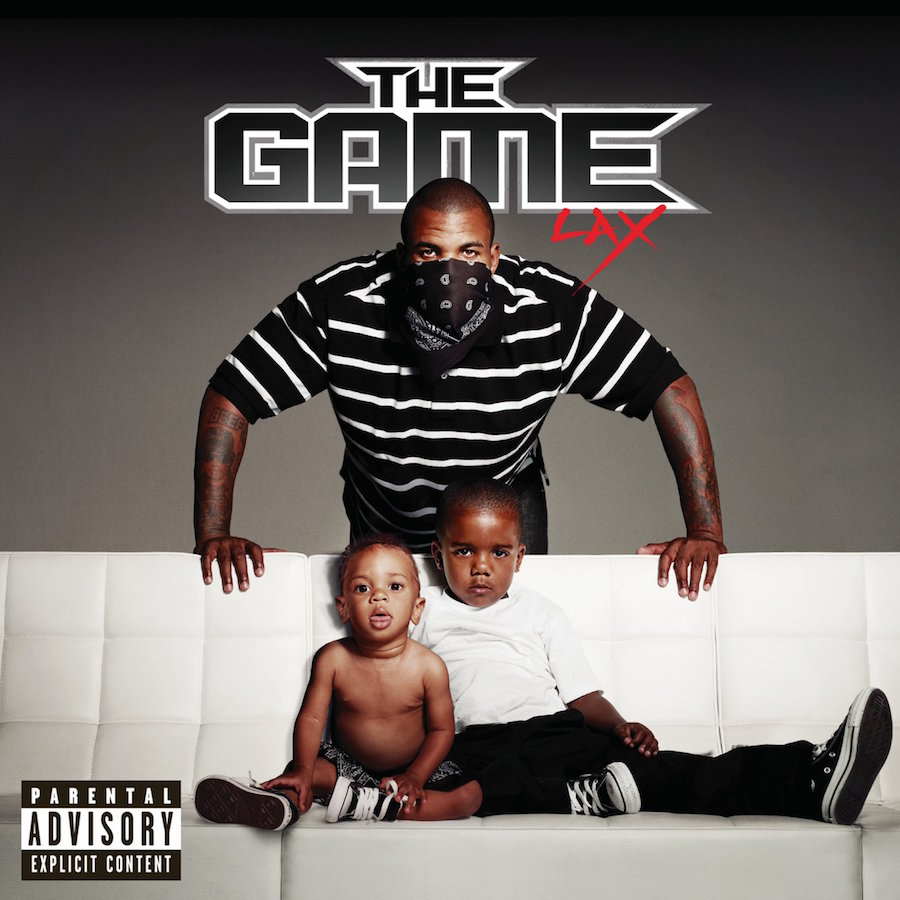 Over the course of his career, The Game [click to read] has dared fans and foes to convince him that he’s something less than a superstar. Whether it be his emergence as a part of G-Unit [click to read], his numerous rifts with everyone from 50 Cent to Ras Kass [click to read] or his run ins with the law, Game has made sure his name has been on the tip of everyone’s tongue. His debut album rocked Hip Hop’s foundation and his sophomore album held its own amidst turbulent circumstances that surrounded his career (separation from G-Unit, Dr. Dre, etc). As he approaches his third album, Game doesn’t have expectations of a debut album to go up against. Nor does he stare in the face of a sophomore slump. LAX is Game getting an opportunity to be Game – minus controversy or any other outside force pulling at him.

After DMX lends a prayer to open the album, Ice Cube [click to read] shows up to raise the curtain on “State of Emergency.” It give the impression that Cube is present to perform the proverbial passing of the torch to his younger west coast brethren. But although Game arguably represents the finest the left coast has to offer, the crowning is just a bit premature – even on Game‘s third album.

Game is no slouch on the mic and stands tall more often than not on LAX. As long as there is a subject for Game to focus on, he’s firing on all cylinders. When Game flexes lyrical muscle behind sinister production on “Dope Boys” all is superb. With former Blink 182 drummer Travis Barker providing some extra percussion, the energy between Game and the production illuminates even the most overcast mood.  Although “Game’s Pain” sounds like it would be gloomy, Game and Keyshia Cole bless the track with some of that Cali love. Game brilliantly pays homage to everything he loves and does the radio friendly track some justice.

But it isn’t always peaches and cream in Game‘s life and powered by a moody Cool & Dre offering, Game  gives a glimpse into what makes him tick. Lines like “Walked through the gates of hell with my Impala parked in front/With the highbeams on, me and the devil sharing chronic blunts,” show just what Game‘s vivid lyrical prowess can develop on the burner “My Life.” Although the Lil Wayne guest spot appears wasted with a simple hook, Game proves that a Weezy contribution would only interrupt Game‘s powerful insight. Elsewhere, Scott Storch chips in something buttery with the Chrisette Michele assisted “Let Us Live.” Game‘s aggressive flow bops across the slick keys while Michele‘s sultry vocals compliment the offering.

Where Game truly shines is when he captures the final moments of Tupac, Biggie and Eazy E‘s lives on “Never Can Say Goodbye.” Although his retelling of Tupac and Eazy‘s last hours are compelling, it is his honing of the late Christopher Wallace that is truly amazing. Channeling Big‘s flow, Jayson Taylor pulls together the fatal closing chapter from Biggie‘s perspective in a breathtaking manner.  A simply remarkable song that encapsulates the very talent that Game harnesses.

The one drawback that has haunted Game‘s career is the incessant name dropping that has become his trademark. The name dropping on LAX isn’t as annoying as it has been in previous outings but it still pops up often enough to notice. Whether or not it is an efficient way to pay homage to the culture is really up to the individual. But sometimes it appears that name dropping is all Game has to supplement innovative concepts and engaging content and that’s when things fall apart like the title of Chinua Achebe‘s classic book.

“Money” appears to be another Cool & Dre [click to read] banger but the subject of loot is just too tired for Game to make interesting. Hence he kicks off the rhyme with “Kanye told me that ‘Jesus Walks’ in ’04,” and proceeds to phone in a lackluster performance. “Touchdown” doesn’t fare well when it comes to trying to lyrically undress the ladies. Game‘s gruff vocals simply don’t seduce and come up short when paired with Raheem DeVaughns airy chops. Nottz usually impresses when working behind the boards but both he and Game pull up lame on “Cali Sunshine.” Game just can’t cash in the name checks and delivers groan inducing lines like “With more ass than Deelishis/That’s my Flavor of Love.”

The guest appearances throughout are hit and miss when it comes to putting the spotlight on Game. He may raise a few eyebrows when enlisting Common‘s [click to read] services but ultimately strikes gold on “Angel”. Kanye West drops in a gem that has enough soul for Common but just enough synth action to bump in a lowriders with chronic smoke floating from the exhaust pipe. Although Ice Cube and Lil Wayne [click to read] are limited to a hook, both are utilized effectively. It’s when he gets outclassed by his guests that things get hazy. Game falls behind the curtain when Raekwon [click to read] stands tall with Cuban Linx influence on “Bulletproof Diaries.” Ludacris [click to read] absolutely menaces “Ya Heard” while Nas shows Game up on the awkward ode to the late Martin Luther King Jr on the Hi-Tek [click to read] produced “Letter To The King.” It’s moments like these that show that Game still has some ways to go before being considered one of the best to do it.

Game has yet to fail when it comes to production. But on his third outing things aren’t as stellar as previous endeavors. While “Angel” and “Dope Boys” astound, the aforementioned “Cali Sunshine” and “LAX Files” slip on a banana peel. The latter finds Game trying to double time his flow. But on a snoozer of a track, it just doesn’t mesh well.

LAX, simply put, is a good album. However, it’s just not the type of album to end a career on, as he has suggested on several occasions. There is much lyrical life left in Game and he surely hasn’t reached his full potential as of yet. LAX may be good enough to keep his fans content and easily topples his G-Unit foes recent release, but for a talent who hasn’t hit his ceiling, more is expected. It’s like having a 6 speed Porsche, but occasionally grinding the hell out of the clutch. It’s still one of the best vehicles on the road, but needs to work out a few kinks to clobber the competition.