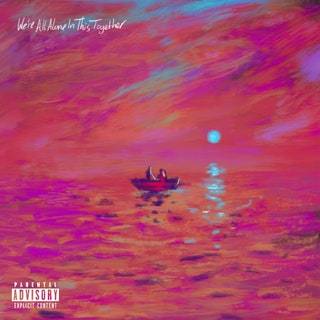 United Kingdom rapper Dave’s intensely personal debut Psychodrama won awards by the dozen. It was a commercial smash, boasting the highest first-week streams for a British rap album in history, propelling the then 21-year-old to an enviable peak of commercial and critical adoration. Psychodrama proved Dave — who received the Drake stimulus package on “Wanna Know” in 2016 — wouldn’t be added to the pile of rappers Drake boosted who never panned out.

Following a breakthrough debut album is a daunting task, but with We’re All Alone In This Together, any claims of Dave peaking early are washed away by a tidal wave of astounding bars, proving his talents have only just begun to be tapped.

Dialed into the ails of our times, Dave soaks a majority of the tracks in the pain he feels over the imperfection of the world. He laments racially charged poverty, immigration policy and policing, as well as international conflicts and his inescapable lack of hope for the future.

The underlying message of the album is no one should feel alone in thinking the world is pointless, expressed poignantly on the intro “We’re All Alone” with, “I tell my fans we’re all alone in this together you can trust me/All the shit that you been feelin’, you’re feelin’ with me.” The melancholic keystone allows Dave to build a bridge connecting all those trapped in the same mental dungeon. He acknowledges the pandemic of anxious depression without offering a cheap inspirational speech or an overly-optimistic solution, acknowledging life’s cruel circumstances.

But Dave’s ruminations aren’t always so grand in scale. On “Law of Attraction,” he turns inwards to tackle romantic insecurities, exploring interpretations of love and breakup fallout alongside the equally lovesick Snoh Aalegra. Throughout “Both Sides Of a Smile,” Dave reflects on immaturity and uses dueling perspectives to tell a unique wait-for-me story, which puts on display the type of complex internal battles other rappers merely state they have.

Some tracks clock in at almost 10 minutes and rarely slip under the three-minute mark, which puts Dave at risk of bogging down listeners. Aware of this danger, he places strategic breaks in the commiseration. On the extravagant “Clash,” he trades flexes with Stormzy, while on the sunny “Lazarus,” he offers boasts juxtaposed with greater world critiques.

The track is cut from the same cloth as J. Cole’s “Lights Please” in the way it emulates crying over the world’s ills at the club. “In The Fire,” enlists Fredo, Meekz, Ghetts and Giggs to prove the Brits have more talent than the rap world could have guessed.

Dave is in an elite class of lyricists. He’s cuttingly honest and focused in his writing, making each song sound like a one-on-one conversation, all while exploring a massive range of topics, both common and personal.

In a single 30-second stretch on “Verdansk,” he flexes his car collection, makes fatalistic references to Call Of Duty: Warzone and laconically condemns Airbnb’s corporate racism. Even when he barely has a beat beneath him, like on the 10-minute, 2,000-word behemoth “Heart Attack,” he has enough magnetic lines to keep a careful listener spellbound.

The beats are smartly curated, spanning an entire globe of influences. There are loving odes to grime and U.K. drill and sonic tributes from the Caribbean, the U.S. and Nigeria. “Twenty To One” is among the most ethereal beats in Dave’s discography, showcasing the soft, psychedelic side of the young doomsayer.

For all the good, problems do arise throughout the album. Dave often asks too much of his listeners, a common issue on both of his projects. Songs such as “Law of Attraction,” “Heart Attack,” “Both Sides Of A Smile” and “Survivor’s Guilt” are too indulgent to stand on their own and will only be remembered within the context of the album. The poorest song comes with the Wizkid-assisted dancehall knockoff “System,” a hollow conceit that shows Dave’s weakness in making music for mass consumption.

Despite an important message and gloomy passages, Dave’s sophomore effort never feels overly weepy. At its core, We’re All Alone In This Together is a meticulously constructed, well-balanced rap album. It’s an important landmark, placing Dave high in the best rappers under 25 conversation.

There is crack in Lazarus

On Repeat!!!! @Santandave1 the whole tape is pure flames ???? pic.twitter.com/sOPZmV8Q6N

Before I die I’m gonna give @Santandave1 a hug. This album hit different