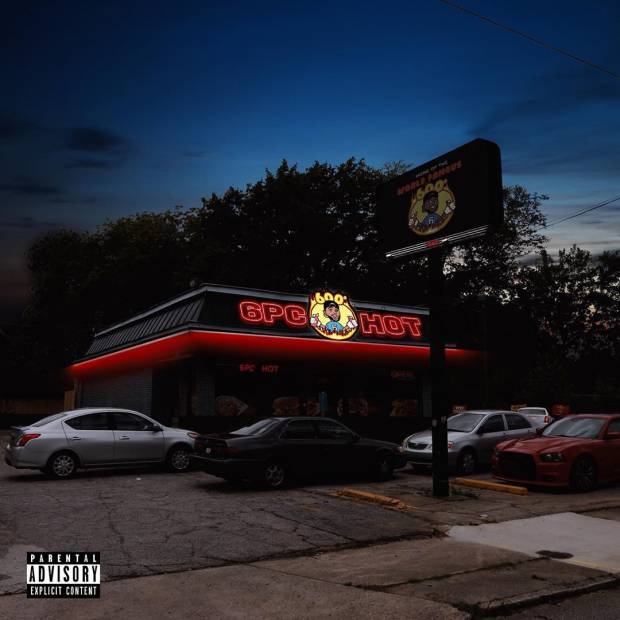 What do Young Nudy, Gucci Mane, Sade, T-Pain, Young Thug, MC Hammer, and Usher have in common? They all get namedropped or referenced in some way on 6LACK’s new EP, 6pc Hot. Some of those names are definitely a larger influence on Ricardo Valdez Valentine, Jr.’s heartsick trap-driven R&B than others. Nonetheless, 6LACK succeeds at creating a sound that’s got a personality beyond the moody, even if he’s unlikely to be donning parachute pants or an ice cream cone face tat anytime soon.

A big help is how much persona 6LACK lends to his lyrics. There isn’t exactly a deficit of Autocrooners, but few could come up with such an encapsulating line as “I’m still the love doc, hood therapist.” Many of 6LACK’s lyrics could be delivered as rapped boasts, but singing “You ask me if I’m choosin’ my dreams over you, I said, ‘Hell, yeah’,” on “Elephant In The Room” with the emotion he does makes it all the more impactful.

Although 6LACK’s vocals can be right at the cusp between rapping and singing, the most prominent showcase of dropping bars is not on opener “ATL Freestyle,” but “Know My Rights.” As decent as he does, he gets outshined by Lil Baby, not only in the rapping department, but also in bragging. 6LACK refers to himself as “top 10,” which Baby quickly one-ups with a “top five” claim. Also, saying that he’s “the only rapper who can go on the road and don’t fuck with no groupies” is an absurdly wordy way to promote monogamy.

6LACK's '6pc Hot' EP Is A Masterwork In Music Marketing

It’s still possible to enjoy 6pc Hot without focusing all that much on his words. He knows how to work these beats so his vocals feel like as much of an instrument as the hi-hats and kick drums. “Float” transitions gorgeously from the Ari Lennox-and-saxophone-featuring “Long Nights” and 6LACK’s vocals live up to the song title. The only time his vocals don’t feel like they do a beat justice is on “Elephant in the Room.” A Timbaland-assisted trap beat, with some evocative synth bass, is let down by how lethargic 6LACK sounds for much of the run. As a result, confrontation of the song’s title and lyrics isn’t felt as much as it could be.

But he can deliver sensitivity in an appealing way, best illustrated by closer “Outside.” Singing with minimal effects over reverberating keys and alluding to these quarantined times, 6LACK imagines having kids and forming other memories with the object of his affection with just the right amount of bittersweet.