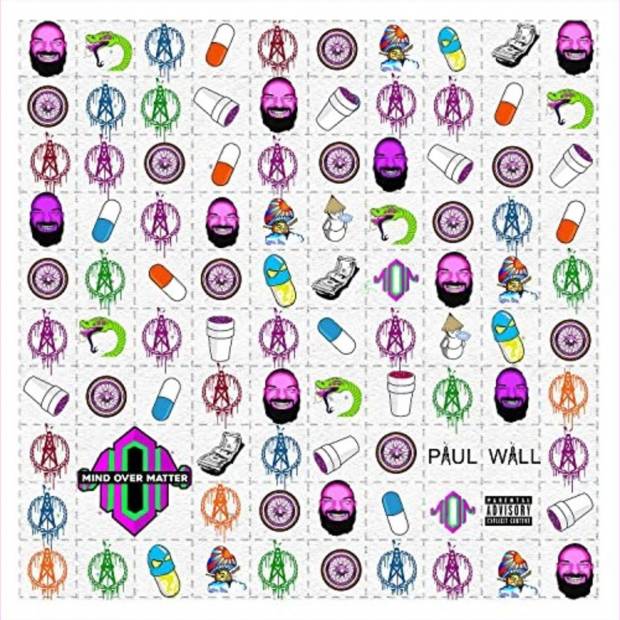 Texas legend Paul Wall has maintained a fairly consistent release regime following the mid-2000s Houston rap boom that propelled him to mainstream prominence. Despite continuing traditional era subject matter from riding slabs’ to po’in up and hustlin’, “The People’s Champ” has managed to creatively evolve himself as he creeps into the 40-year-old club. Last year alone, Wall successfully collaborated with Statik Selektah for the boom-bap tinged Give Thanks while lending guest features to Rittz, Zaytoven, fellow Houstonite Tobe Nwigwe, among others.

Consider his latest effort, Mind Over Matter, an average exercise in fan service.

Opener “Get Mine Forever” lends itself more to the hustlin’ side of things. Wall spits, “You only ball when you lower the hoop/You semi-pro bro, how cute/No goof, pockets obtuse/My drink thick and never loose” over producer Five 9’s, sparse piano loop and drum combo after giving standard luxury vehicle descriptions at this point is par-for-course. Though possibly tiresome depending on listeners’ taste, there are some unique production moments brought by storied West Coast producer Scoop DeVille through “I Am Him.” Thematically similar to the opener, the track works better than other examples including “Goin Live” or “Prices Go Up” due to the unique coastal fusion.

When Scoop lends his instrumental to the more drug-inspired “Year of The Pint,” there’s a purposeful elevation compared to kindred joints like “Psilocybin Vibin” or the hilariously titled “Too Turnt To Make A Store Run.” The same could be said for “Another One” featuring Mind Over Matter sole guest appearance Pure. Even slab rid’in moments “Work The Wheel” and “Red Stripe” work in ways that’ll either amuse longtime listeners or find themselves grown tired.

Those who were overwhelmingly supportive of Wall’s more lyrical turn on Give Thanks should appreciate “Monetary Exchange.” Lacking a true hook, Sir Paul Slayton boasts, “My grind is legendary, hustle so extraordinary/All my layaways paid off like Tyler Perry/And, oh, by the way, prayer is preliminary/ =This for my dead dawgs, not the pet cemetery” with more lyrical confidence than the majority of Mind Over Matter. Roblo provides the perfect lay-up of country-dripped funk for Wall to send off the track with “It’s a dirty game, very unsanitary/But I’m never not clean, not even momentarily/I’m The People’s Champ, Oiler Mob, honorary.”

Mind Over Matter sounds like artistic regression considering the unique magic displayed last year with Statik Selektah. However, die-hard fans of Wall’s regional bread-n-butter focus this time around should get enough mileage. Just expect Mind Over Matter to stand in the shadow of his better works over the years.