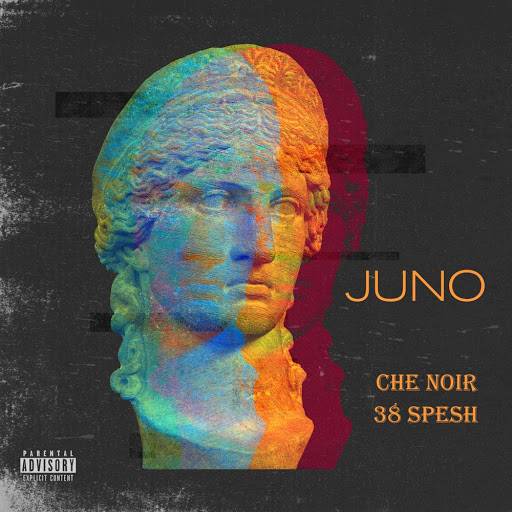 Buffalo MC Che Noir has been on the cusp for a minute now, asserting herself as one of the go-to female artists in the burgeoning sub-genre of Hip Hop that’s exploded from her hometown. With the Trust gang off to a strong start this year, she blessed fans with a 10-song collection of music, Juno — produced entirely by mentor 38 Spesh.

“JUNO” OUT EVERYWHERE. Comment your fav song so far

The first release since her breakthrough Thrill Of The Hunt 2 (also produced entirely by Spesh), Che lets her pen bleed like a sliced jugular, as she touches on tragedy, triumph, catching Ws and the sweet taste of success. Of course, there just the right amount of braggadocio that binds the gems together, making the incredibly cohesive playlist a balanced listen.

What becomes clear is how hard the road to her current trajectory has been; she gives glimpses into the dark depths of her backstory, though she’s careful not to dwell too deeply. For example, on “Win Lose or Draw,” she describes losing it all at one point in her journey. On “Concrete Jungle” (featuring Eto and Jai Blakk), she starts her verse, noting that her jump-off was from a place of no hope.

The most insightful cut stands as “Royalty,” featuring Street Justice and Klass Murda, where she describes death and strained family relationships — specifically with her sister. “Fruits of My Labor” also sees her lamenting on seeing family struggle with addiction while reaffirming her grind and her focus on removing herself from the ills of the hood.

No matter how inherently tragic some of the bars get, there’s an air of overwhelming strength in Che Noir’s music. It’s what makes her so alluring.

Having announced during an interview with HipHopDX last year, her true debut LP, The Essence, is slated to drop later in 2020 — as well as a collaborative project with Spesh and a full project with another producer — Juno feeling like an appetizer is likely no mistake. Though it’s a solid effort, it feels a little incomplete, clocking in at just over 23 minutes and ending rather abruptly.

For fans of Che, Juno stands as a beautiful addition to her timeline. For those still snoozing on Trust’s First Lady, the project is an easily digestible gateway. There aren’t any massive viral hits here, but as a body of work, it delivers and once again positions her as someone who should most definitely be on your radar.