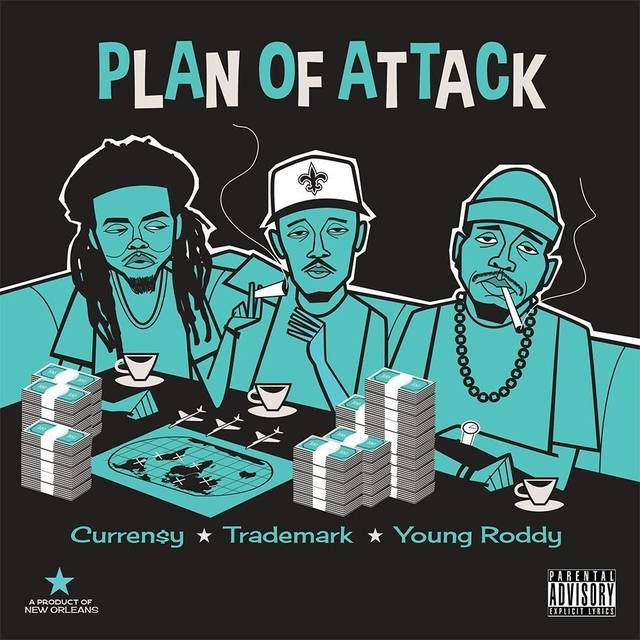 Whether you have a voracious appetite for everything associated with the Jet Life collective or have barely more than a passing familiarity with its most famous member, Curren$y, you should be able to see the strength in their Plan of Attack compilation album.

Three members of the New Orleans crew, Curren$y, Trademark Da Skydiver, and Young Roddy regroup for a project where each rapper sounds like they’re supporting each other while also trying to prove they’re the best.

There’s no sign of pressure to conform to the latest industry trends; nor is there any defensiveness where they yearn to convince us that they’re great rappers and lyricists. The Jet Life crew puts their focus on delivering sharp flows and candid observances from coming up struggling and having made it. They’re able to smoothly weave together these concepts, like on “Power,” when Curren$y raps, “More than a decade on the ground, I deserve these cars I drive.”

All three rappers appear on every track, and while some verses are better than others, their individual and collective affinity for the pen is never in doubt. The only time inspiration seems to be waning is when the hook isn’t totally up to snuff, like on “Came Way Up,” which has plenty of other redeeming qualities, like Roddy’s line, “There’s peace and love but still keep a piece by my side” and Drupey’s Beats’ smooth bass.

Curren$y opens the title track with a verse that achieves the perfect balance between sounding at-ease but also urgent. However, a case could be made for Roddy, with his signature high-pitched voice but slower flow, or Trademark, sounding world-weary but also on-alert, having the best verses. The generosity of rotating track positions means that each rapper has a chance to open a song, keep the momentum up, or bring it home.

While Plan of Attack has its share of flexes, they tend to be ones that keep Jet Life grounded in reality and have some idiosyncrasies. On closer “Still Coolie in the Cut,” Currens$y talks about “orange shag carpet in [his] 70s’-styled apartment.” Even if his interior design choices aren’t terribly appealing, his confidence definitely is. Equally endearing are Roddy’s advocating for safe sex and talking about his love for his daughter and desires to be a good father.

The accurately-titled “No Hook,” with its held-out horn notes courtesy of Big $avage, starts with Curren$y getting meta as he refers to the strength of this project. (“Can’t sit on the shelf/They coppin’ it in cases of 12.”) This leads into Trademark professing his own greatness and underappreciated status (“I was too real for them lames”) before Roddy gets real in a tense verse that mentions a friend getting shot. (“They call it the ghetto; we call it the trap, ‘cause that’s what it is.”) Like the album, each part works well on its own but it becomes quite magical when heard at once.

Three longtime colleagues trading verses for 43 minutes with no other guests doesn’t make for the flashiest gimmick in 2019, but when listening to something as immersive and well-rendered as Plan of Attack, gimmicks are a ridiculous, if not foreign, concept.