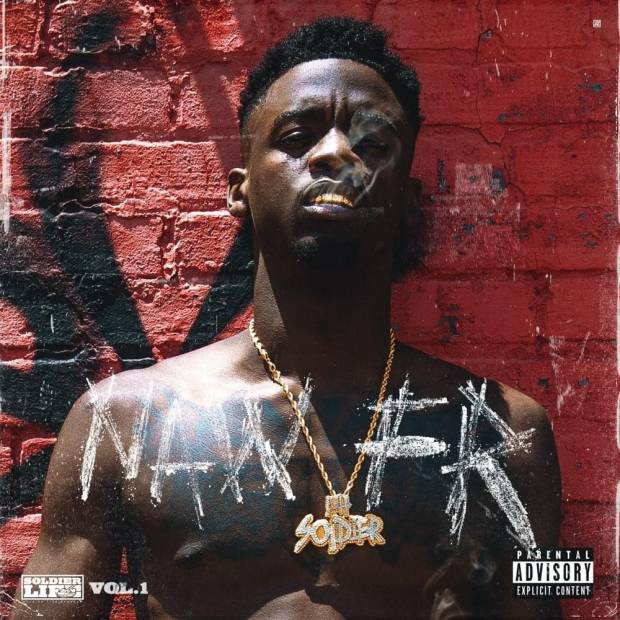 When people discuss the southern Hip Hop scene, the top buzz comes from Atlanta’s hotbed of emerging artists or the bevy of SoundCloud rappers from South Florida. However, none of this applies to the rise of Luh Soldier. The Alabama rapper has been making quite a bit of noise recently with his viral Instagram freestyles and catching the attention of World Star Hip Hop, notching over a million views on his music videos for “What Happened” and “Securing The Bag”.

The Cinematic Music Group signee came onto the scene in 2018, dropping his short EP, Out On Bondand following that up with another project earlier this year, Soldier Mentality.

Referring to his sound as “trap gospel,” Luh takes the listener straight to the streets of Birmingham while offering a raw look at what goes down in the mud — though the trip can get quite tedious.

Tracks like “Gamblin’” and “Trap” showcase some solid flow that blends well with the gritty subject matter and trap production. His best delivery comes on “My Campaign” with some quick-hitting bars and a cold-blooded cadence.

The project has a few guest appearances, with some adding to the song and some torpedoing the track altogether. The highlights include “NAW FR” featuring a catchy hook coupled with an energized appearance from NLE Choppa. Peewee Longway also comes through with a satisfactory verse on “Exclusive” backed by some of the best production of the tape with bright piano lines, light guitar strums and short bursts of horns.

Unfortunately, not every guest is a welcome contributor. G Herbo’s offbeat approach doesn’t mesh well with the spacey and bass-filled production on “Chosen One.” Big 360z’s Lil’ Baby rip of a chorus on “Same Struggle” only further emphasizes the blandness of the song, with Luh Soldier not helping matters using an awful effect on his voice that makes him sound amateur. The production on this track also sounds like a messily mixed type beat off YouTube.

Overall, many times the production holds this mixtape back, packed with the standard trap beat offerings of booming kicks, bass-filled 808s, and dark piano lines. A couple of songs on the record will change up the instrumentals adding woodwinds and horns to the mix, but it doesn’t happen often enough. Using several different producers many times helps a project flourish and stay interesting, but here, it just creates an incongruent up and down jumble.
Production aside, Luh produces some shining moments when he’s providing commentary on trapping, spitting with a stream of consciousness approach. On “Peyton and Eli” Luh delves into the problems he faces in his life and how he feels about the world around him. While he doesn’t always consistently stick to the topic, he will drop a few lines here and there that paint a picture of his struggle. He talks about understanding how many people depend on him and how he loves the streets but recognizes that staying in that lifestyle could get him locked up.

With this project, Luh does enough to be worth checking out. The building blocks to a good album are there and with time Luh could refine his talents and improve on his skills. At this stage though, this offering has some bright spots, but ultimately just doesn’t move the needle and is too monotonous to warrant full repeat listens. However, there are at least a couple of tracks deserving of a spot in the rotation and listeners shouldn’t sleep on him. At just barely 20-years-old, there’s plenty of time for Birmingham’s son to put his state on the map.