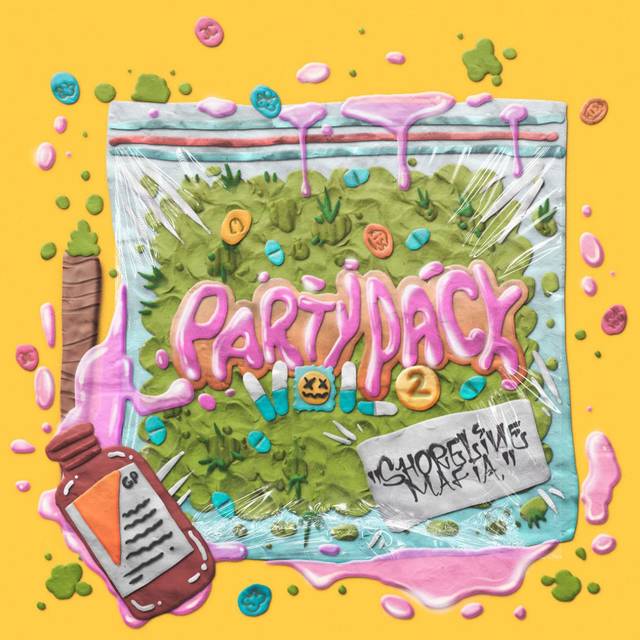 It’s a shame that summer is officially over because Shoreline Mafia just dropped a collection of summer pseudo-slappers that would have done a decent job at rocking the past three months. The nine-track Party Pack Vol. 2 follows up their 2018 release Party Pack (that dropped almost a year to the day) and packs a similar summery punch.

The L.A.-based mafia consisting of Ohgeesy, Rob Vicious, Fenix Flexin and Master Kato don’t switch up their frivolous formula in the slightest but manage to once again bring some heat in the fall.

The essence of Party Pack Vol. 2 lies in its simplicity and brevity as the project runs just under 25 minutes. They are all highly digestible, melodic vibe-a-longs that can exist damn near anywhere. Literally. The club, the car, the gym, Foot Locker and even an elevator if it’s trendy enough. Really, the term “party” is used loosely here when describing the project because for the most part its laidback in subject matter and overall vibrations. It will simply make listeners (mainly Cool Teens™) want to grab a six-pack of Modellos, call up the homies and enjoy their day off from working at Zumiez part-time.

“Fell in Love” is the album’s most popular song to date and despite boasting nothing more than falling in love with chugging lean and scarfing down calamari, it slaps moderately hard. This is largely because of AceTheFace’s nouveau G-Funk instrumental; Fenix Flexin is far from the God MC. The rhymes are as basic as it gets with simple similes like “brought the choppers like a Harley” and “I’ma shoot it like a free throw” being the extent of his literary arsenal. To his credit though, he catches an exciting Migos-flow later down the tracklist on “Half N Half”. Perhaps the most unnerving line on the whole project is on the following track “Caribbean” where Ohgeesy spits: “I’m with the same niggas just like a synonym” — which is, just, bad. Luckily Beat Boy and Ron-Ron The Producer get busy on the trap-tropical beat.

It’s inherently clear that those in search of lyrical miracles won’t totally vibe with Party Pack Vol. 2 except for when Hot Spitta swoops in to save the day on “Chandelier”. Curren$y’s verse is as strong as any he’s dished out over the past few years and is by far the album’s best sixteen. But the lines and lyrics don’t even really matter on this album — as bad as that sounds. They are simply verbal passengers getting carried along by the fleet of beats that bang pretty damn hard.

Like it or not, Shoreline Mafia is exactly what the majority of Gen Z is sounding like, looking like and looking for in their rap stars. The music on Party Pack Vol. 2 is ideal for simply not thinking. You might not be quite conscious or using your brain at all but you’ll be happy – and these days, happy is a luxury.