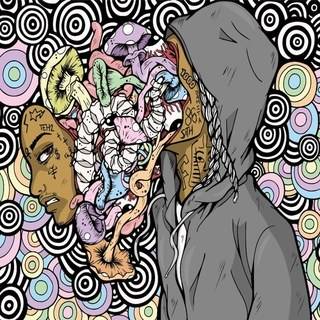 Nef The Pharaoh is a rapper that happily eschews labels and styles. The California native seems to prefer to let the music take him where he needs or wants to go, which is why his latest effort, Mushrooms & Coloring Books, is an LSD-like trip through different styles and topics.

The cover art, naturally, feels just at home at a Grateful Dead concert as it would on the cover of any of Nef’s albums, but one can easily credit the shared home base (or at least, within the relative vicinity) that the two diverse musical entities share. So, it’s safe to say that Nef draws just as much inspiration from his eclectic home.

He follows up “Drought” with songs that are simply fantastic, like “South Vallejo” and “Love Got Us Beefin’.”

As great as songs like “Drought” are, there are still a few places where the Vallejo native falls short. For example, on “High Voltage,” Nef makes the mistake of enlisting Tyga for a few guest bars. And, as we already know, Tyga’s performance on wax is less-than-stellar. But if one already finds Tyga’s bars like nails on a chalkboard, one will be extremely disappointed to know that Tyga’s low-vibrational raps rub off on Nef. The duo takes turns taking swipes at transgendered folks, and Tyga sludges up the song like poison with lyrics that are beyond stupid (“Even when I’m at the house I’m paranoid/I don’t trust you if you don’t fuck my boy.”)

Also, Nef’s attempt at obtaining a mainstream hit in “Rockstar” also falls short. He falls into the usual traps of rap star braggadocio — dodging photographers, fucking bitches, clashing with label execs — and it doesn’t sound “right,” for lack of a better word, coming from him.

Still, Nef The Pharaoh does a great job, overall. He holds it down nicely for the Bay Area, but his style transcends locales and creates a sound that his core fans will, no doubt, champion.