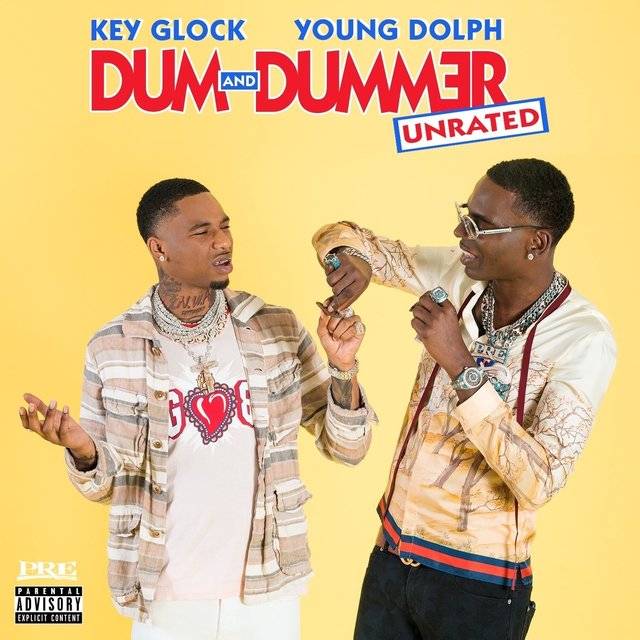 Following possibly one of the weirdest publicity stunt of the year, “King of Memphis” Young Dolph and his Paper Route Empire signee and real-life cousin Key Glock have come together for a brand new collaborative project, Dum and Dummer.

The premise is a little misleading, as only half the album is collaborative. Dolph goes solo for five tracks and Key does the same for six. At 22 songs in total length and with Bandplay serving as the sole producer, there is a certain level of cohesion that this project exudes (although it does become a rather taxing listen).

Dolph and Glock (who is 12 years younger than Dolph) have an incredible amount of chemistry on display. Hearing them ride the funky guitar riffs on “1 Hell of a Life” or the trunk-rattling southern bass of “Blac Loccs” more than lives up to the hype.

When they’re isolated from each other, Dolph songs remain surface, yet manage to have noticeably more depth than Glock’s — “It Feel Different” and “Summo’” being two great examples. “Crashin’ Out” is another gem, with Dolph breaking down getting into the game, as well as the wealth and authenticity that he feels sets him apart from a lot of “rappers” out there.

Though Key Glock does manage to write at least one reflective solo cut that explores something other than standard, interchangeable fare, “Monster,” it still remains fairly cut and dry — an almost impersonal tale of coming up. His charisma and energy carries him though, and Bandplay’s beats suit him incredibly well.

One surprisingly consistent theme interwoven throughout the project is this sense of overcoming by remaining fiercely independent. The word cutthroat is used a lot when describing their drive. “Cutthroat Committee” is a defiant proclamation of dreams coming to fruition, while Glock’s “What’s Wrong” seems to reinforce this sense of almost paranoid loyalty to his circle, and their collective grind.

Still, no particular theme is explored in detail.

In many ways, this project feels like a bunch of random songs just callously thrown together into a playlist. There is something to be said for quality over quantity, and while Dum and Dummer isn’t bad, but it fails to raise above just being OK.

What could have been a solid 11-song LP is drowned in sauce, making it an arduous listening experience with too little highs to warrant anything other the same monotonous head nod.

There are glimmers of brilliance, but with no clear standout songs, this album may not stay in your rotation for very long.