Review: Your Old Droog Drives To Next Level Lyricism On "Transportation" LP 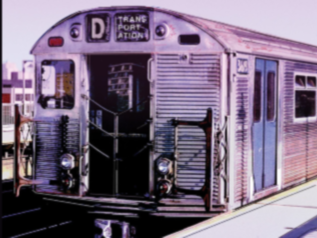 On Your Old Droog’s latest LP Transportation, his second 2019 release, the mysterious MC lives up to the title as an endearing yet sardonic tour guide metaphorically using every possible mode of transportation in his hometown Brooklyn and New York City.

For battling purposes, YOD showcases his bag full of clever punchlines as the underground rap’s third rail to beware stepping past when crossing him. Droog has a pied piper’s mentality to his rap peers and anyone who he feels enabled his millennial sense of entitlement.

His longtime producer Mono En Stereo (formerly known as RNTC) handled eight tracks’ beats and three interludes, the lion’s share of its fifteen total. Other producers who pitched in their instrumentals for the LP are Oh No, The Purist, Quelle Chris, and Skywlkr.

Droog has a more conceptual approach on Transportation than the Mach Hommy-executive produced I Wasn’t Even Close released two months prior. However, his formula remains intact for songwriting and selecting beats. The song titles are references to planes, trains and automobiles (“Loosey Spot On Wheels,” “Rocket Launch Interlude,” “Getting Off The Plane Interlude,” and “Taxi,” and “My Plane”) while interpolating his take on gaining his status as a respected MC who points back to early 90s.

On the first track “Stillwell Baby,” YOD shouts out the street in his Coney Island stomping grounds while declaring his passions as a rapper. (“I’d rather be a dope failure than a wack success.”)

YOD also shows his range as a balladeer giving his accounts past superficial romances to heartfelt crush on “Monthly” and “Train Love.”

On the former track, he talks about carrying on a fling with a female who wants a relationship with him more than he does just for the sex and her unlimited Metro subway pass.

He raps in a glib manner: “She hold me down, just gotta slide through once a month/That’s a fair catch like a punt/She anticipate my return like Devin Hester/When I’m gone, got bonds like an investor/Ultimate finesser/Make sure you leave that unlimited on that dresser.”

The album’s first video is split between two tracks for ‘The Cheese/Under The Train (Transporting).” It was released as a tease for his fans when he dropped It Wasn’t Even Close, which confused fans as to why it came out without those tracks being on said album. That helped continue YOD’s image as a man of mystery, such as when he emerged in 2014 widely perceived as Nas’s alter ago. The bassline on “The Cheese” has a smooth, chunky bassline that slightly varies from the one on Heavy D’s memorable 1992 single “You Can’t See What I Can See.”

YOD’s also offers humorous takes on obscure Hip Hop trivia from the late 1980s through the 2000s caters to Hip Hop’s malcontent and trap music detractors. This includes an ode’s to his idol MF DOOM’s original group KMD and rhyming over their “What A Niggy Know?” beat on “Taxi” with Quelle Chris, one of the album’s sole guest features aside from Wiki on the hard-knocking “Vigilantes (Remix).” Droog also shows his respect for former Bad Boy artist G. Dep on “Head over Wheels II (An Ode To G. Dep)” about the incarcerated rapper’s promising career gone wrong and his underrated debut album Child Of The Ghetto in 2001.

Like the Nets drawing more fanfare and NBA talent than the Knicks, Your Old Droog has consistently made stellar contributions to Brooklyn Hip Hop as the New York rap’s scene greatest attraction over the city’s other boroughs during this decade. This is among his best works since Packs in 2017 and his self-titled debut in 2014.

With lyrics such as “Came in the game and changed the complexion like Charlemagne,” and “I’m still the same guy with zero hope in the human race, yet I still aim high/Why I don’t trust nobody, everybody is a snake/When I got my money up, like I’m checking if it’s fake,” Droog remains driven to be an influencer than ride in the fast road to riches and possible road to ruin.