Review: Ghostface Killah & RZA Keep It All So Simple On "Wu-Tang: Of Mics And Men" EP 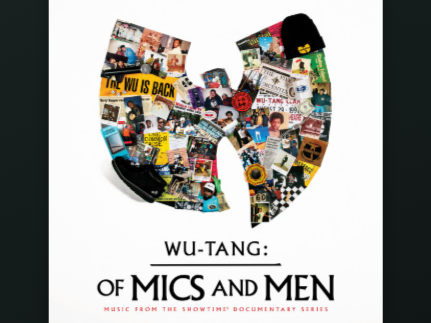 The story of Wu-Tang Clan’s 10-member composite is revered in the Hip Hop community like astronomers are enthralled by the 10 planets hovering within our solar system.

Most Hip Hop fans are aware of the Wu’s omnipresence over the past three decades. But whenever there is a new finding or anecdote about their mystique revealed, it adds more to their legacy.

The alluring four-episode Showtime documentary series Wu-Tang: Of Mics and Men and its accompanying EP adds another raised iron flag along its 25-year-plus triumphant journey.

This EP has four new songs and three skits reviewing Wu’s history as delivered in the documentary while gathering and dropping its accumulated mental jewels along the way.

The opening track “On That Shit Again” produced by DJ Scratch is a low-tempo rhythm and spacious double piano key with a sample of RZA’s voice yelling “The Wu-Tang slang is mad dangerous.” Ghostface Killah reignites his role as Wu-Tang most sought-after member showcasing his role in the hood and rap community. RZA joins him on the track for its second verse but doesn’t come as intensified as his Wu compatriot.

“You can’t outthink the RZA, nigga, I’ll make your brain shrink/My lyrics are vitamins, I go from A to zinc.”

The second track “Seen A Lot Of Things” featuring Ghostface, Raekwon and singer Harley on the hook has the most replay grit on the EP.

Ghostface maintains the passionate delivery that he emerged as the first verse rapped on Wu’s classic debut in 1993.

“I raise the Wu flag when they scream for glory/The clouds open the beam of light, you hear my story/Custom-made scrolls handwritten in coffee/And feather-tip pens one of the prophets brought me/And that explains why I spin on the axis/Born original, so my mind fades to blackness,” the Wallybee Champ laments.

RZA produced four tracks which are “Do The Same As My Brother Do” as well as interludes that are excerpts from the film. They consist of Nas offering commentary about Wu’s initial impact (“Project Kids”), legendary Hip Hop journalist and Luke Cage screenwriter Cheo Hodari Coker’s backstory about a violent encounter with Masta Killa in 1994 (“Yo, Is You Cheo?”).  In addition, there’s an overbearing keyboard riff for “One Rhyme” in which Masta Killa discusses his entrance to the Clan and his first written rhyme for his memorable clean-up verse on “Da Mystery of Chessboxin.”

This is EP is lean and isn’t ranked among the group’s most beloved work such as Enter The Wu-Tang: 36 Chambers, Wu-Tang Forever or their solo outings like Raekwon’s Only Built 4 Cuban Linx, Liquid Swords and Supreme Clientele.

It doesn’t even have the same energy as its silver anniversary celebration album Wu-Tang: The Saga Continues in 2017. There are high points and lethargic pit falls. However, Staten Island’s enduring griots bring the ruckus with personal reality checks about what they’ve learned from their infighting and outpouring of love for the W from across the globe.