Review: TLE Cinco Brings More Of The Same On "Cinco 2.0" 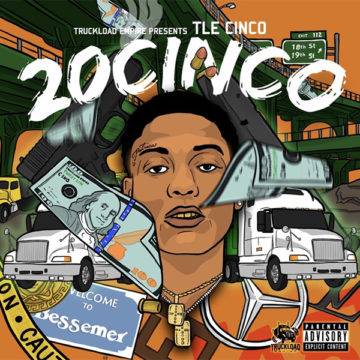 Southern-style Hip Hop is enjoying a bit of a resurgence as of late, and the leaders of the new school are choosing a guttural-sounding, rapid-fire sound of rapping over the so-called “crunk” sound of years gone by. TLE Cinco is one of the leaders of this new Southern school, and — bless his heart, as they say in the south — he certainly knows how to capitalize on the good thing that he has, for however long he has it.

With a Worldstar-ready video and a 13-track EP under his belt, the Alabama native drops Cinco 2.0 in an attempt to “reboot” what you think you know about both him and Southern-style Hip Hop.

The mixtape, which was released on the independent 300 Entertainment label, is a solid offering, to be sure. Standout tracks include “All The Money,” which made quite the noise in his hometown of Birmingham, and features TLE Cinco spitting bars like “Ice on my neck, all cold/I got the check, and I throw it/I got the check, and I blow it” over a sparse, melodic beat. The special guest appearance by Tee Grizzly on this track is, of course, a welcome addition to the song, and adds a bit of flavor, as well.

Additional standout tracks include “City on City” and “Asking to Eat,” which features the same flow and the same melodic hooks as featured on the “All The Money” track that made its debut on Worldstar Hip Hop. “Asking to Eat,” especially, is a modern work of art, with such lines as “tryna see how the fuck I do it/Imma get to my check regardless/Bitch, I’ll shoot at your house to get to my target/Fill it with all red dots like Target.” Clever wordplay, to be sure, and a fine entry into TLE Cinco’s oeuvre.

Even with its strengths, Cinco 2.0 gets repetitive after a while. There’s no difference in the subject matter from track to track, and while it’s essential to rap about what you know, it’s also essential to do so in such a way that keeps the listener engaged. Cinco 2.0 doesn’t really show much promise of “speaking” to too many folks outside of the greater Birmingham area, and while that’s fine for where he’s at right now, it will need to change — and quickly — if he hopes to take his career to the next level.

With that said, TLE Cinco certainly has enough talent behind him to take his career to the next level — and to the next state, even — if he so chooses. Switching it up a little bit more — speaking to experiences he’s had along the way on this sometimes-rocky road to success — while working with a few different producers will help him get to where he needs to be.