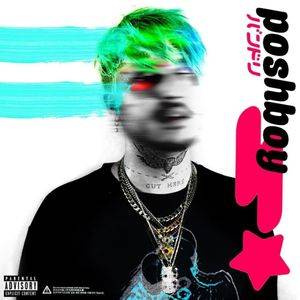 It’s not often one gets a chance to review an album by a rising rapper who released his work on Cleopatra Records, an independent label mostly known for its goth rock-style offerings. But so it is with Poshboy!, the new album from ITSOKTOCRY, a Denver-based indie artist whose work can best be described as an amalgam of different styles, rather than straight-ahead Hip Hop.

But if Lil Nas X can call himself country, there should be no reason why ITSOKTOCRY can’t identify as Hip Hop.

The cover of the album is just as strange and disjointed as the music — a blurry picture of the green-haired white rapper with face tattoos and a Jared-Leto-as-the-Joker vibe. No song on the album lasts for more than three minutes, with the average track being about 1:30 in duration.

The first track, “Jirachi,” starts out with an electronica-type Nine Inch Nails circa “The Perfect Drug” era, and features ITSOKTOCRY rapping faux stream of consciousness lyrics like “I ain’t different/I’m just swaggy now” and “I like that you don’t like me/I love the fact that you don’t like me.” It’s unclear what, exactly, he’s trying to convey with the song, and as a result, it sounds young and amateurish.

“Mukbang My Wrist,” which clocks in at exactly 1 minute and 30 seconds and features Nick Prosper on the backbeat, fares a little better, with growling bars like “I don’t play games on no XBox, no/I think that everybody likes being soft/They been playin’ games, I just cut’em off.” Again, not the deepest lyrics in the world — certainly nothing anyone would consider a classic in this or any other generation — but marginally better than the rest of the nonsense.

The blessing, and the curse, of ITSOKTOCRY is that he comes from the late Lil Peep school of rap. The duo was even in the HEARTBREAKK CLUBB collective together, and their sounds are both reflective and reflexive of one another.

This is not a bad thing, on its face — BEXEY, for example, is another Lil Peep compatriot that fared well with the same style of Hip Hop.

The difference, of course, is that BEXEY has a set of songs that are much better in structure and delivery, and are — for lack of a better word — complete. ITSOKTOCRY, however, tried to go the experimental route, but successful experimental artists have an authenticity that ITSOKTOCRY lacks. He seems more determined to be a Lil Peep tribute artist than an artist that stands on his own merits.

ITSOKTOCRY is someone that, to be sure, has his own following, earned through both his own hard work and the remnant fandom of Lil Peep. Hopefully, he will grow his fandom by developing his craft better — ditch the fake experimentation, stick to proper songwriting and work on the overall delivery.