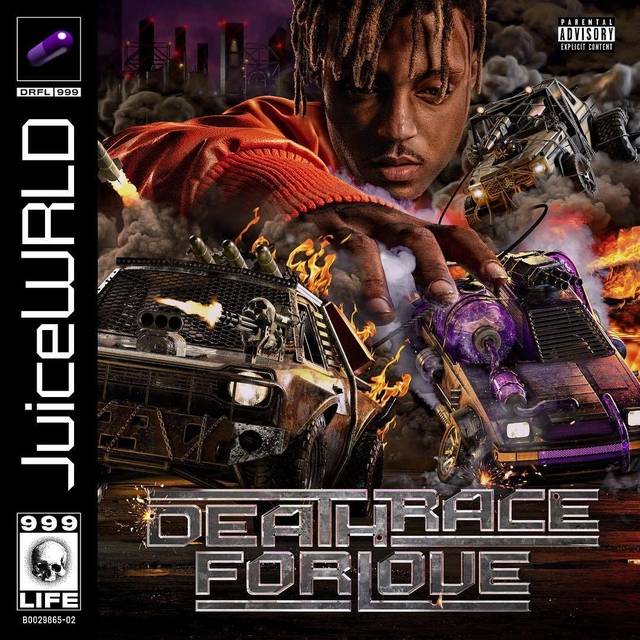 When listening to Juice WRLD, there are quite literally two worlds colliding. One world is obviously Hip Hop — thanks to the modern day trap production that 20-year-old uses for any and all of his tracks. The other world fuels his lyrical content and is derived from early 2000s emotional pop-punk.

On paper, it seems to be an odd combination but it isn’t hard to see that for the past two years that exact medley of trap and tears has become all the rage against the machine amongst Gen-Z rap hopefuls. At this point, everyone who is currently on the come up has more than likely experimented rapping My Chemical Romance lyrics over Young Thug-type beats.

That said, it almost always gets executed poorly; often because of emotionless delivery due to half-assed wave riding. With Juice WRLD though, every croon is captured in a snow globe of rattling remorse. Last year’s Goodbye & Good Riddance definitely scratched the straightforwardly sensitive surface but his sophomore album Death Race for Love really jackhammers its way to the angsty teen in all of us.

Juice gets deep and dark into his troubled mind on album opener “Empty.” He croons: “Like a crawlspace, it’s a dark place I roam/Ain’t no right way, just the wrong way I know/I problem solve with Styrofoam/My world revolves around a black hole/The same black hole that’s in place of my soul” while transfixing heart-wrenching emotion. These tumultuous teenage tendencies (alliteration!) appear in spades throughout the album and continue to build on the fact that Juice is going through serious growing pains.

On tracks like “Big” and “Out My Way” Juice does more diligent rapping that humming, getting firmly in his bag and not in his feelings for even a short while. For the most part, Death Race for Love wraps Juice’s high and heartbroken lyrics in sweet harmonies then spread across catchy trap beats produced in large by Hit-Boy and Mira. Aside from that pair of producers, the likes of Purps puts the trap tones on ice for a hot three minutes with “Hear Me Calling,” which falls perfectly into the tropical riddim bucket that has yet to become annoying.

A trend also synonymous with contemporary rap is the infamous “data dump.” For those unfamiliar with the term, it’s essentially a copious amount of tracks get thrown onto one album in attempts to bump streaming numbers. At 22 tracks large, Death Race for Love gets tiresome no matter how emotional evoking the music. There are songs like “Desire” and “Ring Ring” that sound practically identical and could have ultimately been morphed into one single song (or saved for a mid-year EP). Thankfully the features are minimal, allowing Juice to be the center of attention. It’s the listeners’ attention that has to stay alert for an hour.

Genre-blending albums (no matter how commonplace they might be these days) are not easy to pull off and for that, Juice WRLD should be given credit. From the seemingly sincere lyrics to the equally candid delivery, Juice truly goes with his gut in whichever way (rap, sing, hum, sob).

After all, he did freestyle the entire thing.