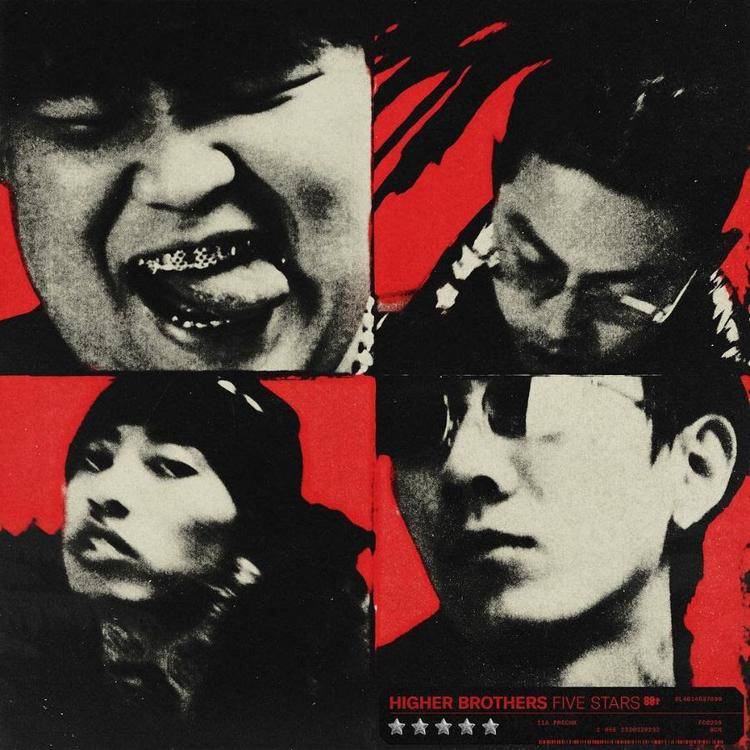 During the past few years, the mass-media company 88rising has successfully put credible Asian Hip Hop on the map. Though Rich Brian (formerly known as Rich Chigga) is indeed the label’s most well-known act, the Chinese rap-group Higher Brothers have flexed their Mandarin Trap skills on their 2017 debut album Black Cab and 2018 follow-up EP Journey to the West.

On their sophomore release Five Stars, the quirky quadro take some sonic risks and collaborate with a roster of interesting artists.

Higher Brothers rap in a chaotic mix of Mandarin and English, weaving together Western brand names and pop culture references into their verses before rapidly going back to spitting bars in their native tongue. The first half of Five Stars is a cohesive series of bangers. Album-opener “16 Hours” has the group rapping over a cheerful, momentous beat and highlighting their distinctive personalities. The feel-good momentum carries over to “Open It Up.” Rapping along to Luca’s funky textured beat, Higher Brothers pull off one of the more polished and catchier moments on the project.

Though they have notably improved their craft, the 88rising group refuse to take themselves too seriously. The rambunctious “Flexing So Hard” is self-aware of the dynamic between Hip Hop stars and fans eagerly emulating canned tropes. After a song packed with boasts, on the bridge, a woman (played by band mom and translator Lana Larkin) mocks the listener and implicitly, Higher Brothers themselves: “Flexing? You call this flexing?/ All you do is listen to Higher Brothers all day/ How about you get a girlfriend, get a job, save your money/ Come on now, that’s flexing.”

Higher Brothers tackle their outsider status with a similarly self-aware irreverence on “Sunshine” — a highlight that samples Gorillaz’s hit “Clint Eastwood.” They explore the dynamics of a romantic relationship in the lines, “Excuse me can you speak English/ Turn into can you speak Chinese, please bitch/ Say some Chinese to please me/ You love me you miss me hate me.” It’s a familiar story about groupies embedded with their specific, international twist.

The album also brings forth an impressive group of guests. “One Punch Man,” featuring Ski Mask the Slump God and Denzel Curry, has every rapper relishing in weirdness. Over a riveting beat, Curry geeks out: “Magic on me, trick, I’m Dumbledore/ Open your back up you lookin’ like Bulbasaur/ Bitch I’m tyrannical, go in tyrannosaurus/ Stupid ass nigga you know that’s a metaphor.” “Won’t Believe,” featuring ScHoolboy Q, and “Do It Like Me,” featuring J.I.D., are also strong efforts that demonstrate the group excelling as collaborators.

Unfortunately, there isn’t a consistent level of quality. “Top,” featuring 2018’s greatest comeback king Soulja Boy (Soulja Boy??????), is obnoxious and generic. And “No More,” featuring Niki, flirts with pop but never comes together. But ultimately, the album ends on a strong note when fellow 88rising signee Rich Brian jumps on the thrilling banger “Zombie.”

Five Stars probably won’t be Higher Brothers’ crossover into the mainstream. But even if the quality occasionally dips, their sophomore album rarely lacks charisma.