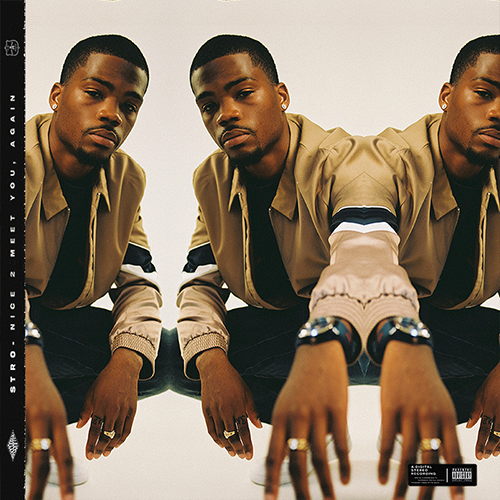 Stro has gone through three artistic transformations in his young career, each of them shedding parts of his former self to introduce a more focused MC who is a product of Hip Hop and dedicated to bettering his craft. Stro feels like light years ahead of The Astronomical Kid and Astro in terms of finally finding the direction he wants to go with his music, which you can listen to the seeds on 2017’s Grade A Frequencies.

While Stro has yet to find the common thread that ties all of his influences together, he’s a spitter first and foremost, delivering consistently on a handful of underground mixtapes. That attention to lyricism is found again on Nice 2 Meet You, Again, the Brooklyn rapper’s first project since signing to Nas’ Mass Appeal Records.

But where Stro impresses with a variant of flows on nostalgic-leaning beats, he’s limited in creating a cohesive album that can be listened to from top to bottom.

Nice 2 Meet You is the 22-year-old’s effort at creating vibes he wants to see more in the culture. MCs at his age have either tried their hand at melody-driven songs or attempt to cash-in on the trend of exploiting drug use for cool points. Instead of complaining about those things on wax, he channels that energy into a collection of eight songs that re-introduce him as older, wiser, and more boastful about his talents. “Tell L.A. Reid I ain’t a pop star / from the backstreets, I’m a blockstar / Signing mumble rappers, now they got y’all / Setting niggas back like a cop car,” he raps on the intro. On other songs, Stro sounds like a blossoming artist with a purpose. From “Bullshit” and “Waters,” which samples One Way’s “Don’t Stop (Ever Loving Me),” to “Enough” and “Testing,” it is proof that Stro has the stylistic range to make an impact.

But there’s plenty room for improvement. Stro still needs to work on his rap love songs— “Room” isn’t as cute as its meant to be—and be bolder in his political stances if he sticks to this route. “I worked, stayed patient, and got over the hump / ‘Cause rushin’ (Russian) don’t help unless you’re Donald Trump / Now I’m a smarter man than my president / I’m on a mission, stack dough, fuck a politician,” he raps on “Enough.”

If Kendrick Lamar’s co-sign through a Twitter dm made him feel like an “official artist,” it should fuel his motivation to be on that level of greatness. He’s definitely on his way – and with a bit of fine tuning – Stro can be the next generation’s voice with a message that Hip Hop needs to hear.