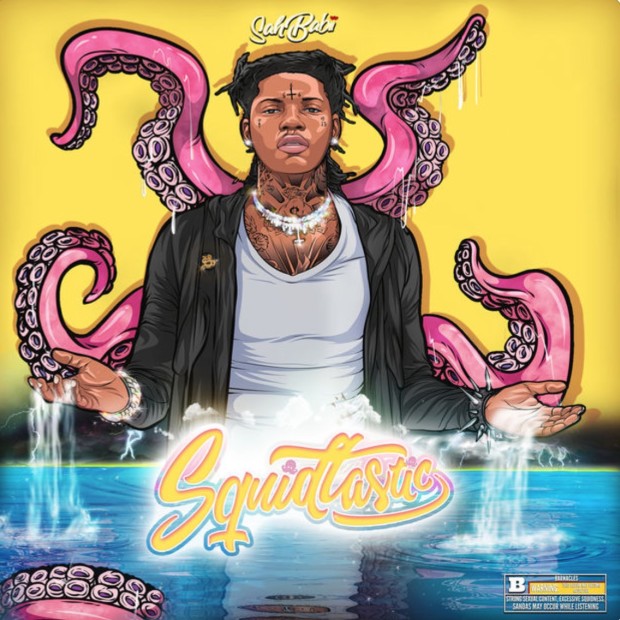 In the 21st century, it’s easy for rappers, and other musicians, to get taken advantage of by unscrupulous record label executives and similar sundry.

So, it’s in this newly “woke” (or, at least, somewhat smarter) landscape that SahBabii emerges with his latest mixtape, Squidtastic. The Atlanta-by-way-of-Chicago rapper, who first came to national attention in 2016 with his song “Pull Up Wit Ah Stick,” has figured out that he’s going to get his coins through sweat equity, solid Hip Hop, and organic features.

SahBabii wisely makes his albumixtape available for download through iTunes, though fans are welcome to stream the project through their favorite streaming service, as well. It may not seem like much, but given how little artists make on various streaming services, the rising star can add this move to his series of other smart business moves.

And while “Pull Up Wit Ah Stick” got a veritable who’s who of current Hip Hop greats to remix it — T-Pain, Wiz Khalifa, and Fetty Wap all did their thing; SahBabii also garnered the attention of Mona Scott for a reality show of his own when Drake flew him out to London to potentially remix the song — “Squidtastic” only features rapper T3, who is also SahBabii’s older brother, on the back-to-back tracks, “Boyfriend” and “Sunny Days.”

The R. Kelly-“7 Squids,” is conspicuously left off this project — a smart move, given the #MuteRKelly movement — as were “Watery” and “Outstanding,” the latter which featured 21 Savage.

Fortunately, SahBabii’s talent is strong enough to shine on his own, and this is especially evidenced in “Behind the Scenes,” “Tall,” and “Honey Bees,” which are the three strongest tracks on this mixtape. It’s almost as if SahBabii’s talent is choked out when another rapper is featured on the track; playing to this, and trying to stand on his own two feet, then, are clearly on the top of his to-do list.

Certainly, SahBabii could stand to be “polished,” for lack of a better word — he’s not as photogenic, or as media-savvy, as other Atlanta luminaries like Ludacris, T.I., and Gucci Mane — but that’s merely a function of both his age, and his experience, or lack thereof.

But Squidtastic is nothing if not a respectable addition to Atlanta’s Hip Hop oeuvre, and a strong follow-up to last year’s equally notable S.A.N.D.A.S. Given his popularity in the South, his strong bars, and his selection of premium beats, SahBabii is definitely poised to become a veritable tour de force in the near future.