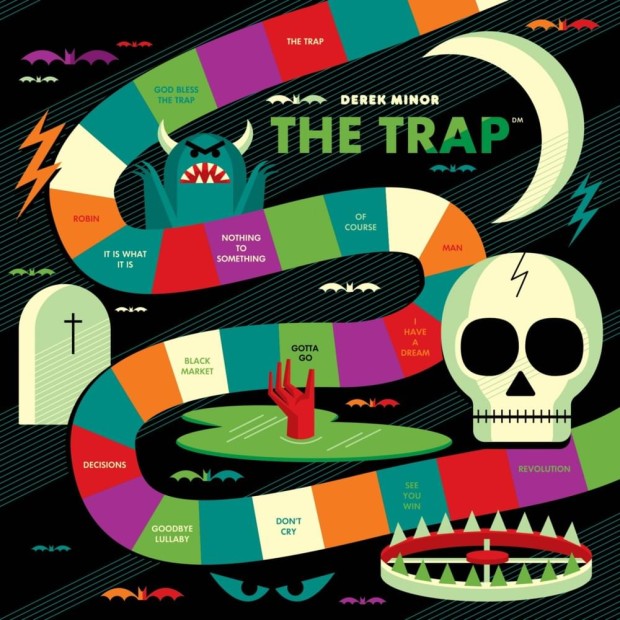 The Christian Hip Hop subgenre has always been more complex than its been given credit for, but in the last decade, faith-based MCs have been more fearless than ever about stepping out of the church and into the streets. Derek Minor is one of those artists, and his latest album, The Trap, is his most artistically compelling and courageous offering yet.

There’s an idea held by some in Christian Rap that concerning oneself with “secular” issues such as police brutality and systemic racism is inappropriate or even sinful. Those people are probably descendants of white Christians who called Dr. King a troublemaker, but that’s beside the point. Minor may anger some traditionalists, but he will delight his core fanbase and beyond with his urgent message of equality and justice. “I Have a Dream” is particularly salient. Minor provides drums that punch like Mike Tyson, and is accompanied by bluesy humming as he laments, “I have a dream that the #MeToo movement was not needed/And all of our women, like queens they were treated.”

“Nothing to Something” features rolling trap drums and a spacy beat courtesy of Chino Dollaz, but Minor’s narrowed-eyed rhymes are the star of the show. “And don’t you dare talk about a broken home,” he warns racist detractors. “Cause for 250 years all our families was buzzed whole.” Minor’s words are compelling; there is no separation of church and state here. He loves Jesus, but will not allow America to use religion as a way to skirt responsibility in regards to people of color. The album’s opus is “Decisions,” which follows a man (guest Dre Murray) who appeals his brother not to act rashly, to a chilling outcome. Without spoiling the brilliant story, the song’s graphic depiction of systemic racism may knock the wind out of the listener.

That’s not to say the entire album is filled with righteous anger. Hood pitfalls are a major theme throughout, though not in the way many trap rappers employ it. Rather than exploit, Derek prays for the d-boys. He encourages hustlers to rise up on “See You Win,” but offers compassion instead of condemnation. Minor is smart enough to know that the “tough” (read: reckless) approaches of the Reagan’s and Giuliani’s of the world have been ineffective, and uses his art to enlighten and reach out a helping hand. Musically, the balance between his steel-toed stance toward corrupt institutions and downright loving approach to hustlers imbues The Trap with engrossing duality.

The production befits the title but features enough variation to avoid sounding like your neighbor’s SoundCloud project. The title track, produced by Minor and the Juice Bangers, effortlessly transitions from elegant piano keys and a Gospel choir to minimalistic trap drums, and back again. Aaron Cole belts out a beautiful hook over “Don’t Cry,” which features plucky, inspiring piano keys courtesy of Minor. Whether the music is delightful or dark, it adeptly accentuates Minor’s message.

There is little to find fault with on this album. If one were to nit-pick, the message of “Man” loses its luster because of Minor’s hushed delivery and choppy flow. “Robin” is sonically pleasing, but doesn’t add much to the overall product. However, these are minor flaws in a majorly impactful project. The Trap is politically unflinching, sonically soulful, and starkly passionate.