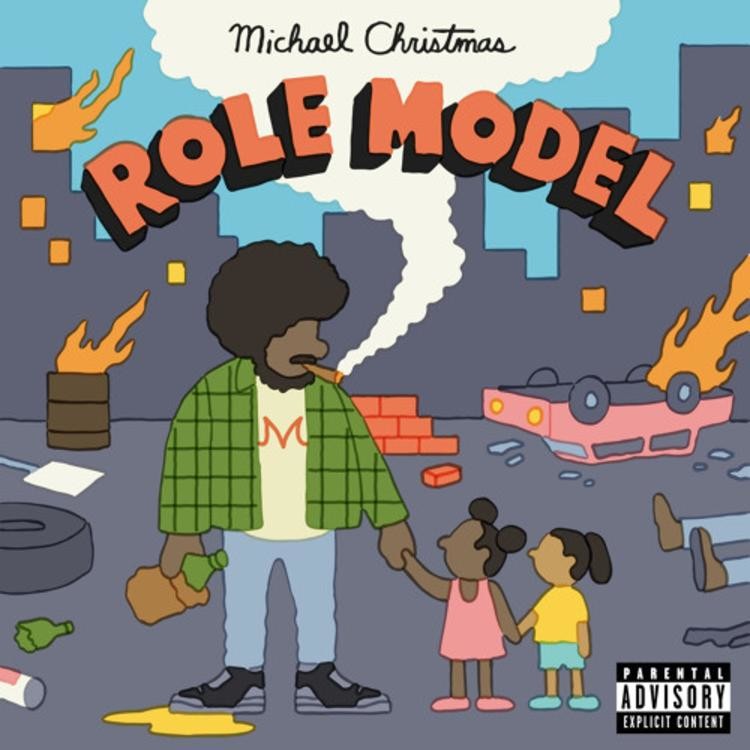 Boston’s own Michael Christmas, just months after signing with Fool’s Gold Records, makes his mark on 2018 by dropping off his first proper album in three years. The 15-track Role Model impressively highlights his ability to combine his comedic wit with a strong musical palette.

Christmas’ style as an MC is unique and rather goofy but always seems to come off as genuine without overshadowing his overall skill set as an artist. This project has a theme of Christmas playing the “big brother role,” giving guidance to the youth through some solid and sometimes hilarious music. The tracks that most effectively deliver reality raps from a somewhat silly perspective indicator Christmas has a high potential in reaching a wide audience. You hear this on tracks like the “Paid In Full”-inspired “Everybody Eats” which features a standout verse from Cousin Stizz, and one of the album’s best offerings “Not For Me.” On the hook of the latter, Christmas melodically declares “I know my life look bad, but that shit look good to me/And one of these bullshit lives they livin’ might be what you need/But that’s just not for me.”

Christmas’ best moments come when he sounds like he’s letting loose and just having a good time in the studio. Role Model’s first released single “Girlfriend,” is maybe the best example of that and is indicative of his stylistic diversity. On the carefree record, we hear him dropping some tongue-in-cheek bars while detailing the girl of his dreams over a bubbly, light drummed instrumental. Christmas raps: “Bang bang bang bang bang, that’s what pops say/Money, power, respect, and grilled cheese like The LOX say/’Scuse me miss, you look fine as hell that’s what I say/”Nigga, please” or “boy, bye” that’s what y’all say.”

There are brief stretches throughout that the more traditional rap fan would deem as corny as the humor is laid on thick at times, but undeniable slappers like “Polo Sweater” and the funky anthem “Ball” provide pace shifts that make those instants irrelevant.

The consistency of his style throughout is admirable but there are times where it feels like you are getting the same record twice — exemplified in the sequence of “Honey Berry” and “Girlfriend.” Such a déjà vu effect occurs a couple times on the album, where it is evident that a shorter track list would have made the audio trek more concise. The latter portion of the album takes on a bit more serious of a tone with songs like “Not The Only One” and “Angels & Devils” providing more unfiltered introspection. It goes the distance in setting up a strong conclusion to an album that takes the listener on an unpredictable ride sonically and emotionally.

Role Model is a refreshing album from a unique MC, especially in rap’s current climate. The featured artists add good variety to the Christmas’ world which is vital seeing his off-kilter nature won’t appeal to the median listener.

Clearly being a risk-taker musically, the future is bright for the up-and-coming “role model.”