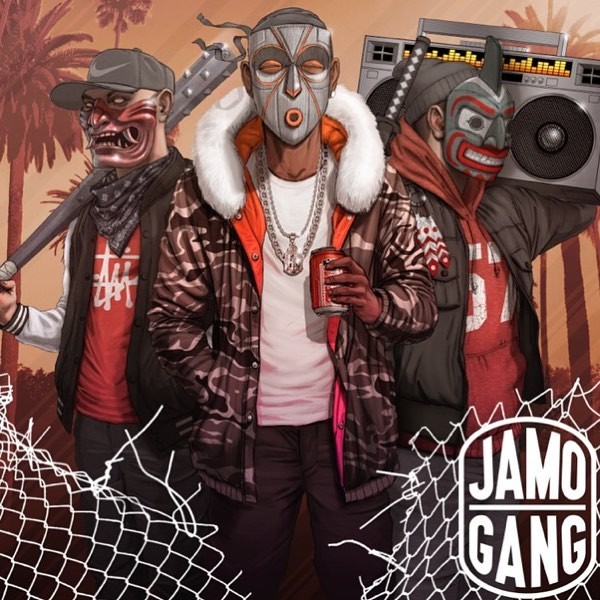 New York underground mainstay El Gant and Los Angeles lyricist Ras Kass have sustained their solo careers by releasing formidable material with some of rap’s most revered lyricists, DJs, and producers. They have joined forces with Long Island’s Brown Bag All-Stars producer/occasional rapper J57, whose 90s retro-style production are a natural fit for both MCs’ talents and target audiences on their Jamo Gang EP.

The EP’s first official track “Go Away” sprints with echoing snares, ambient mellow guitars, and a backward-sounding keyboard riff and low-pitched derived from Reel 2 Reel’s ubiquitous jock jam, “I Like To Move It.” The bombastic bass thumps and stretched guitar licks of “Straight, No Chase” cuts through like a quintessential Gang Starr track rising to the occasion.

“All Eyes On Us” featuring Brown Bag All-Stars’ Deejay Element brings Ras Kass and El Gant’s best lyrics to the table on the project. Although, the outro’s monologue discussing fans and Jamo Gang’s own anticipation for this album is more melodramatic than necessary. Additionally, the third quadrant of the tracks are momentarily stifled by the hooks of “Welcome To The Golden Era” (“Welcome to the golden era/where everything is dope and better”) and the Shabaam Sahdeeq-featured title track makes for a vapid motivational ballad with its histrionic crooning and banal lyrics. The latter song contains the most abstract production that interpolates an aberrant UFO-sound effect in between each of the rappers’ verses.

Jamo Gang’s formation will likely expose themselves to a new generation of fans enamored with the indie rap scene and the punchy snares, thickened bass grooves and obscure, intelligent samples will surely attract tenured rap fans. That said, their metaphorical Jameson glasses are only three-quarters full thanks to all the aforementioned inconsistencies.