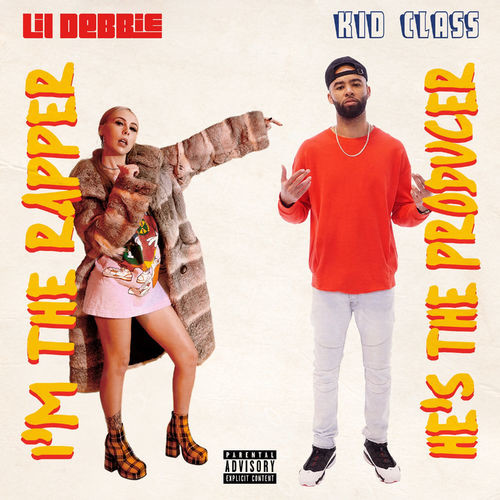 Lil Debbie, one of the more visible Bay Area rappers, has spent her career piggybacking off of more meme-able entities. After entering the scene with Kreayshawn and V-Nasty as the third member of White Girl Mob, she released a handful of songs with the over-the-top RiFF RAFF in 2012. Following some viral success, her solo albums landed with a thud. Last year’s OG In My System was especially underwhelming, stretching its stoner concept thin.

For her latest effort, an EP titled I’m The Rapper, He’s The Producer, she has teamed up with Atlanta based producer Kid Class. The title is a reference to DJ Jazzy Jeff & The Fresh Prince’s pioneering 1988 double album He’s The Rapper, I’m The DJ. But such a heavy-handed homage to one of pop rap’s legends comes with great expectations. Unfortunately, any resemblance to the Philadelphia duo’s magnum opus stops at the EP’s throwback cover. Despite featuring some of the best production of Lil Debbie’s career, this batch of songs feels more like an uneven group of ideas than a finished (and polished) product.

The five-track EP opens with “Oxymoron,” a subtle jam that’s easily the project’s highlight. Lil Debbie’s bars pair neatly with the hi-claps and braggadocious lines like “me and my team try to be rich, you and your team try to seem rich” land with ease. Overall, her relaxed delivery work well with the smooth, spaced-out rhythm as does the mellow, subdued airiness of “Classic.” Though she isn’t much of a lyricist, such digestible records point to the same hit-making potential that still gets her in the biz.

On the following tracks, however, she delves into sounds that reveal her weaknesses.

The next song, “Goyard,” features an obnoxiously Auto-Tuned and lifeless hook about “going hard in my Goyard.” Kid Class’s cheesy keyboard instrumentals and chattering drum claps don’t do the song any favors. The result is a labored track derivative of a discount bin ringtone.

The remaining songs of the EP, “Stunt” and “Top Notch,” are equally packed with Auto-Tune crutches, heavy beats, and brags. Lil Debbie serves up a stew of moods, with some grossly uncooked. “Top Notch” comes off as goofy as she spits cliches with a forced sense of assertiveness. These tracks should have been replaced with three more songs that had the swagger of “Oxymoron” and “Classic.”

Like her former collaborators RiFF RAFF and Kreayshawn, Lil Debbie’s kitchiness verges on a parody of Hip Hop. While it’s impossible to know her intentions, judging by her lyrics (“Yeah I got the classic, the classic”), she clearly wants to be respected. But with I’m The Rapper, He’s The Producer, Debbie offers very few reasons why she should be taken seriously.