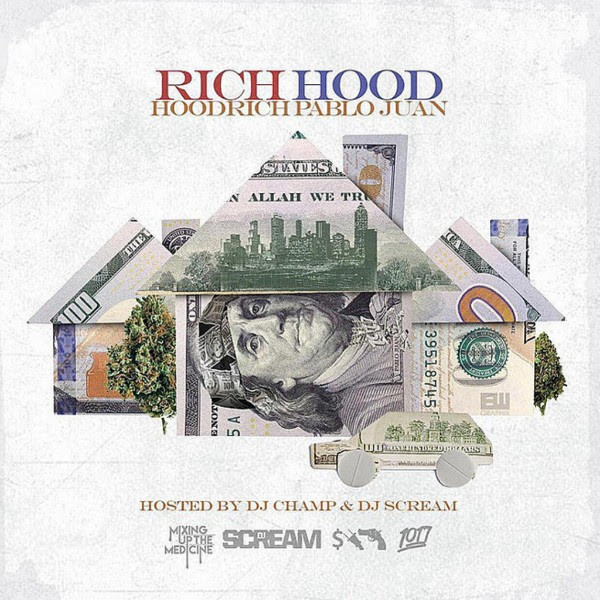 Hoodrich Pablo Juan is taking a page from fellow prolific ATLien Future and dropping projects à la Lil Wayne in the 2000s. Just three months after releasing Designer Drugz 3, Pablo is back with his third mixtape in five months, Rich Hood is proof that Hoodrich Pablo should spend more time on his projects, as it is the musical equivalent of empty calories.

As is the case with most millennial trap rap, Rich Hood’s vibe supersedes its lyrical depth. The production is somehow both downbeat and colorful, with organ licks and piano keys sprinkled atop bass-heavy beats. As memorable as the production is, it’s parallel to the forgettable bars. No one reasonably goes into a trap album expecting to hear Elzhi-esque lyricism, but Pablo and his 11 rapping features empty the clip into a dead corpse with repetitive rhymes of flossing, fucking and flexing.

Even the project’s best beats are marred by shoddy rhymes. Quay Global supplies an entrancing beat on “Racks on Des Diamonds, but the cut is ruined by pointless, unassociated rhymes like: “Ten pints, I’d drink gallons/I dress like I’m going to Jimmy Fallon/Don’t give a fuck, we gon’ fuck that shit up/Drop of a bale in a pickup truck.” The rest of Rich Hood is plagued by equally aimless songwriting and anyone outside of Atlanta rooting for their hometown hero won’t likely be willing to give the lyrical slackness a pass. A song like “1017 Ways” features an amateurishly minimalistic beat that makes oversimplified lyrics such as “I fuck on your baby mama/I’m a motherfucker/That nigga funny, call him Chris Tucker” painfully glaring.

That’s not to say Hoodrich Pablo is completely devoid of mic skills. He has a near-perfect flair for syncing his flow with any beat he’s on. He starts the hook on “Flawless” with “Live for it, die ‘bout my respect/Yeah she’s fine but I ain’t impressed,” and keeps the rhyme going for the next 12 bars of a hook the length of a verse. Pablo’s nimble flow makes even these wordy refrains as catchy as a repeated, four-bar chorus. Still, his swaggerful raps don’t overcome Rich Hood’s serious need for variation. There’s only so many different ways rappers, even ones much more proficient than Pablo, can rhyme about fine dining, diamonds and dumping clips before the music grows moldier than three-week-old bread. Because of this, the content becomes stale midway through the album. Although there are standout cuts like the aforementioned “Flawless” and the lively “18K” that limp Rich Hood to the finish line, the latter half of the tape suffers from some serious muscle cramps.

The audience for this project likely won’t be bothered by Pablo’s redundancy, and with that in mind, he has succeeded in crafting a fluid mixtape that will bang from Bankhead to East Atlanta. But, for the masses, Rich Hood is both an unfilling record and a stark reminder that quality is more important than quantity.