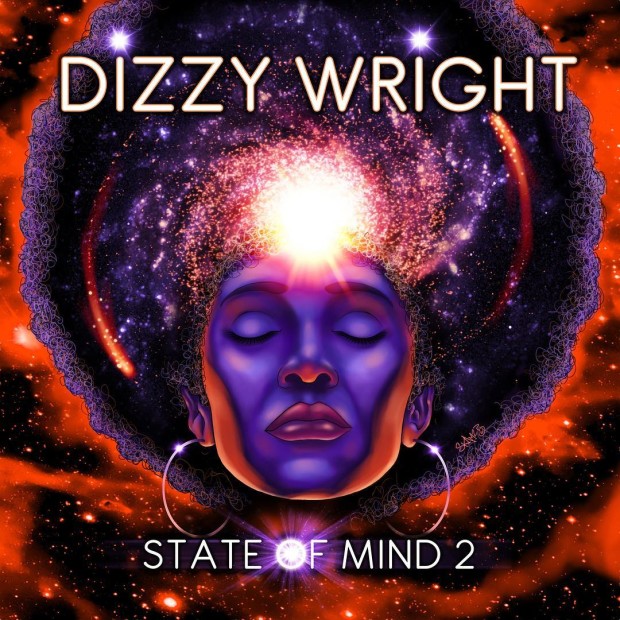 If Dizzy Wright were an NBA player, he’d be Rudy Gay; by no means a voted All-Star, but a consistent staple of strong output year after year. Dizzy continues his streak of dependability on State of Mind 2 — the follow up to 2014’s State of Mind EP — which serves up appetizing tunes for the thoughtful stoner.

Wright’s state of mind hasn’t changed much since his last outing (August 2017’s The Golden Age 2). His raps mirror that chill dude at the party who favors watching a game of beer pong instead of being the shindig’s lifeblood. His self-assured flow makes for a magnetic opener in “No Rush.” The song’s laidback handclaps and after-hours club piano keys are in sync with Dizzy’s reflections about growing up placing bets on boxing matches and partying “‘til cops get called.” His reflections aren’t limited to the past; Wright gets political on “You Ain’t Right Within,” which finds him rapping “protest peace take a knee for justice and they chase you off/You read the new Jim Crow, we don’t even gotta break the law.” It’s these sentiments that separate Dizzy from fellow spaced-out rappers like say, a Wiz Khalifa.

Wright’s manifesto is “Fuck Yo Attitude,” which highlights his remarkable ability to marry the political anger of Public Enemy with the hazy peace of Curren$y. He can stop listeners in their tracks with a line about convicted sexual predator Brock Turner: “White boy got three months for raping shorty, how he get out and Meek Mill got 2-to-4?” However, he also makes it clear on the infectious hook and rising and falling piano keys that while he’s aware of the world’s turmoil, he won’t let it destroy his zen. This is intellectual music for spliff lighters and imbues State of Mind 2 with obvious depth.

The album doesn’t have too many weak links, though, Wright sounds out of place over ominous keys and provides a tepid hook on “Flatline,” and the album closer “I Got Control” is marred by cluttered drums. However, the only major limitation to this project lies in its strength; consistency. While Dizzy puts up another impressive 15-10-5 stat-line with this album, he’s not breaking the mold with his flow or his rhymes. The production is colorful — especially the subdued keys and wistful horns on “Wanna Remind You” and cosmic excursion this side of J Dilla and Erykah Badu’s “Didn’t Cha Know” — but isn’t much we haven’t heard from Dizzy before. Like Spitta and Tech N9ne, Dizzy stays in the pocket with music that his core fans will love. However, maybe a switch-up routine would be worth the risk and deliver truly timeless music.

For now, State of Mind 2, which is admirably breezy in the face of America’s stifling social and political climate, will certainly do.