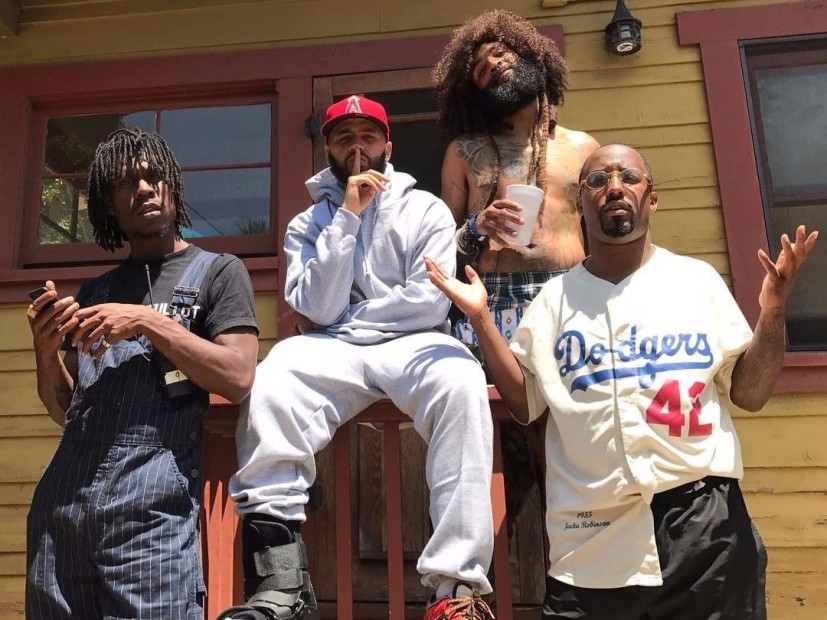 Nearly halfway through “House Party,” a two-steppin’ jam appearing a fourth into Overdoz.’s RCA debut 2008, Friday night sexual conquests soundtracked by some groovy Terrace Martin production are interrupted by gunfire. The irreverent humor as someone yells “I was tryin’ to spend the night, now I gotta go home” during the hysteria serves as an example how much true L.A. natives Kent Jamz, Joon, P and Cream know how to absorb fun — even in the midst of immediate danger.

Such parallels define 2008, an album named after the year the quartet formed and released their first “blog-era” mixtape Bowties and Rosaries. Getting money and partying any way possible is the surface aspirations of 2008. However, looking beneath said surface also reveals some focused topical moments that don’t get in the way of a good time.

Elsewhere, the hilariously accurate “Rich White Friends” finds Kent Jamz with a closing bridge “Got my hoodie on like Trayvon (don’t care about the ghetto)/My pants down like Mike Brown (ghetto)/Remember Columbine (they don’t care about the ghetto)/What happen if we organize (ghetto, ghetto)” after spitting about their financial aspirations. It’s partly immature, convivial and semi-thought provoking all the while conceptually fitting into the “coming-of-age” flavor presented on the album. Despite being released in 2015 alongside the A$AP Ferg-featured “F**k Yo DJ,” the joints have aged gracefully unlike the obvious Billboard reach on “Last Kiss,” which differentiates itself from the Los Angeles sensibilities with a bubbly Pharrell beat.

And such sensibilities are why it makes sense 2008’s cover was shot in front of Martin Luther King Blvd. popular eatery, Worldwide Tacos. The Cali-drenched records “212” and “District” add to that feeling as does “Secret Sunday” with its proportioned balance between Drake-level strip-joint introspection and Atlanta booty-club self-indulgence. From opener “Kush and Red Wine” articulating doubt in fulfilling dreams through synths and multiple drum patterns to album closer “10 Million” snare loops and jungle-sounding drums building on the themes of enjoying success responsibly, the balance of weighty subject matter to lighthearted shenanigans is also streamlined. Those moments of youthful uncertainty provides 2008’s highlight “Karma.” The bottom-heavy chords that compliment the building drums to the track really serve as a production standout.

Overdoz. spent almost a decade churning out consistently great mixtapes and 2008 could have been a bloated disaster with a heavy feature list in an attempt to check-off everything a contemporary major label rap album debut considers requisite. ((Miguel doesn’t offer much help on the failed pop attempt “Backstage” but that’s just one bud in the baggie.) As many artists fail at the attempt to cross into the big leagues from a digital following, the crew representing Crenshaw keep things relatively simple and entertaining by fine-tuning everything that works about them.