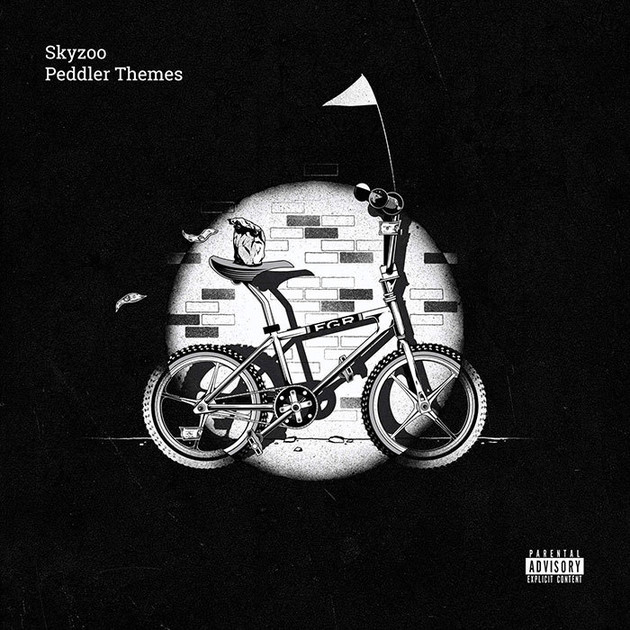 Eight years since the lead single from his debut album, The Salvation, dropped, Skyzoo is still “peddling” music about drug pushers. What makes this familiar theme compelling on his latest EP, Peddler Themes, are his personal accounts, supremely dexterous wordplay and sly cultural references.

Peddler Themes is as much a love letter to the 90s as it is an in-depth exploration of the psyche of the hustler. Sky’s 90s rap references have always been aplenty, and that’s no different here. Entire songs are centered around these references, from “‘95 Bad Boy Logo” to “For Real(er).” The former showcases why Sky’s pen should be in a museum one day but is hindered by a lackluster beat. The latter may at first seem like a blatant ripoff of the Wild Style sample at the outset of Illmatic, until it gives way to the 718 MC painting pictures worthy of Nas’ opus: “I seen cops get lower than where the night’s at/I seen dice turn over and push a life back/I sent dough in the mail like, where the kites at?/They make your bro switch cells before you write back.” S-K-Y has always been heavy on name-dropping and references, but he does it in a more digestible manner, unlike another rapping Taylor. For instance, on “Finesse Everything,” Sky gets his point across with a memorable element of The Wire when he spits “You thinking Hasbro, I’m thinking the back door, boarded when the fear come/And Chris and Snoop with a nail gun.” Urban pop cultures references such as these delightfully sneak up on the listener and enhance the audio scenery.

“The theme music for peddlers, call me what you want/But I leave room for measurers, I’m on it from the jump.” – Skyzoo, “The Beautiful Decay”

If there are two things that ultra-lyrical NY rappers struggle with, it can be enticing beats and strong hooks. Skyzoo ensures a bevy of East Coast producers, including !llmind and Apollo Brown, back his bars with low-key, jazzy production that hearkens to a ‘90s Spike Lee joint. “Bamboo,” with its downbeat horns and rapid drums, is a shining example of this. However, a few of the hooks could have done with some fine-tuning. The refrain on “Doing Something” repeats “Me and (insert friend’s name) was just tryna make something outta this.” While the personal touch is welcome, it leaves room for sorely needed variation.

Obvious throwbacks aside, Peddler Themes isn’t simply a nostalgic ride through yesteryear. The content stays true to the EP’s title, and Skyzoo employs skits to complement his rhymes about growing up with and around hustlers. The album opens and closes with a mother who lives in the hood explaining how she and her husband do everything they can to keep their son out of trouble, but can’t be with him every minute of the day. This dispels the misguided notion that hustling is primarily a result of absentee parenting. By the same token, Sky proclaims his own father’s positive influence on his life on “Long Money,” explaining that their discussions “was drowning out the shit in the hallway.” Skyzoo is best known for his lyrical acrobatics, but personal confessions like this one elevate the project from an urban studies course. Rather than grow stagnant like most traditional MCs, Skyzoo has stayed hungry by mining deeper into his soul to craft compelling tunes for not only peddlers, but also listeners, blunt heads, fly ladies and prisoners.