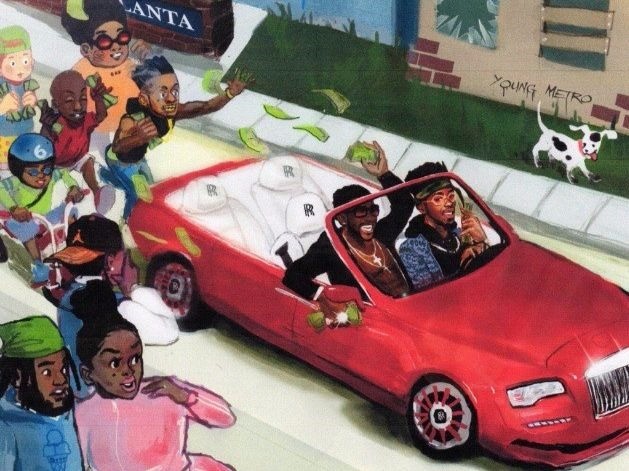 The hardest working man in Hip Hop hasn’t let up his onslaught of music since he got out of prison last year. Gucci Mane’s post-jail grind is reminiscent of 2Pac’s, albeit not at the same level of potency. With his eighth (yes, eighth!) release since being released from prison in May 2016, he continues with DropTopWop, a collaboration with Metro Boomin. The result is a focused effort that highlights Gucci’s versatility and the duo’s remarkable chemistry.

Metro Boomin laces Gucc’s rhymes with a classic horror flick soundtrack. Every track has the same ominous feel which underscores Gucci’s quiet menace. “Tho Freestyle” is both scary and catchy, with Gucci rhyming over a beat reminiscent of the hum-worthy theme from Tetris. Compatibility reaches its peak on “Dance with the Devil,” a cut that finds Gucci spitting in an eerie, high-pitched voice about the temptations that come with fame and fortune as Boomin accentuates his flow with a creepy bassline akin to the theme from Halloween. This production creates a coherent atmosphere that gives DropTopWop near-20/20 focus.

Versatility comes not in the content, but in Radrick Davis’ delivery. He impressively speed-raps through “Met Gala” and keeps an outstanding rhyme continuity on “Finesse the Plug Interlude”: “A conniver, a miser, a plug despiser, a financial advisor, I make you wiser.” The rhyme goes on for two-thirds of the verse and is a rare moment of lyrical prowess. He also gets conceptual on “Tho Freestyle,” which finds Gucci captivatingly capping most of the bars with the word “though.” What Gucci is saying isn’t anything new, but his flair for variety keeps the album fresh. This is especially impressive because Gucci handles bars almost entirely on his own, save “Both Eyes Closed” featuring 2 Chainz and Young Dolph and “Loss 4 Wrdz,” alongside Rick Ross.

DropTopWop is wise in its brevity; it ends after 10 tracks. However, even that may have been two tracks too many. “Bucket List” finds Gucci failing to connect with another concept song, as a declaration of his life goals grows tired quickly. And the aforementioned “Loss 4 Wrdz” serves as an ordinary way to end such an intimidating album. It’s like a movie with a great first and second act that disappointingly tails off in Act 3.

DropTopWop is Gucci La Flare in his essence: drawling thug talk, conversational braggadocio and hair-raising, downbeat production. If you’re looking for top-notch lyricism, you’re in the wrong stratosphere. Guwop opts for the same one-syllable word to end a couplet instead of a rhyme, and is elementary in his detail. “Drop the top on these haters because the drop in the way,” he rhymes in a painfully simplistic manner on the underwhelming “5 Million Intro.” However, virtually no one tunes into Gucci Mane for gems of wisdom or compelling bars. Instead, the East Side Santa’s charm continues to be found in his humor and infectious phrasing. Rhymes like “Four bitches tryna swallow this/I feel like I’m fightin’ an octopus,” on “Met Gala,” turn commonplace themes like groupie fellatio into moments of hilarity. Gucci finds a friend in simplicity, continuing his knack for hooks. “Both Eyes Closed” features a melodic hook that will stay stuck in your head for days and days. His penchant for memorable music makes up for a lack of dexterity and gives DropTopWop a strong sense of unique artistry.