Review: Faith Evans Makes Lemonade From Lemon Zest On "The King & I" 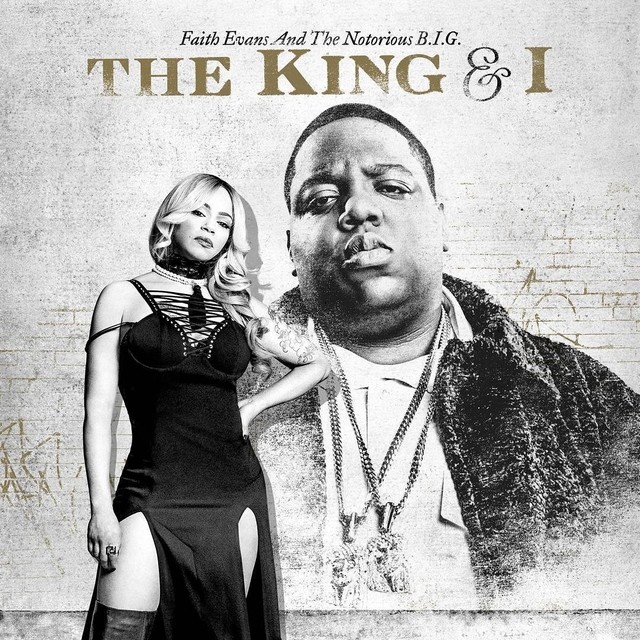 Anyone worth their weight in Hip Hop can document The Notorious B.I.G.’s short-lived professional highlights with enough research, that is if they don’t have the information committed to memory. From being discovered by Mister Cee to the prestigious 1992 Unsigned Hype nomination in The Source to groundbreaking success through Bad Boy Entertainment, the late rhyme giant’s contributions to Hip Hop granted him a legacy still revered 20 years later. A key factor primarily shown to the world in Big’s maligned 2009 biopic was his rocky rollercoaster of a relationship with real-life wife and labelmate Faith Evans. A love at first sight tale that has never been told from her perspective, she’s used the anniversary of his 45th birthday to commemorate their life together with The King & I.

Replicating the capitalistic concept that was tried on the posthumous Born Again LP, The King & I aims to create new magic out of mostly familiar Biggie verses. With a project of this scope boiling down to exactly how well ancient raps are fused and remixed over R&B compositions, the best efforts of well-established producers aren’t enough to stomach 16 songs and half as many interludes. For every well-intentioned moment like “Legacy,” a Stevie J-ballad where the ex-couple (we’re talking about Biggie here!) exchanges lovey-dovey’s, there’s an unnecessary skit like “Big/Faye” where Notorious lead Gravy relives a reenactment of the entertainers’ introductory conversation just once more.

Maintaining Biggie’s Legacy: Faith Evans Explains Her Goals For “The King & I” Album

Throwback specialist Salaam Remi succeeds at recreating a ‘90s vibe with “Can’t Get Enough,” an up close and personal look at how the promiscuous ways of Brooklyn’s preeminent playboy figure couldn’t be tamed. However, what could have been a friendlier moment here is tarnished by the ghost of Christopher Wallace’s off-putting crass vulgarity, as Faith’s lusty devotion is yet another glaring sign of a decline in the quality of her genre’s songwriting. “Tryna Get By” drops the ball by not aligning the timeless well-measured verses from “Sky’s the Limit” with a matching tempo, one of the numerous examples that utterly fails to properly honor the late great Biggie’s memory.

As much as The King & I gives Faith creative space and freedom, the ambitious attempts at placing new spins on Biggie classics generally fall short. “Got Me Twisted” rebirths Ready To Die opener “Things Done Changed” without adding fresh energy to the mix, and where unheralded West Coast legend Fredwreck transforms Junior Mafia posse cut “We Don’t Need It” into a lowrider slapper, its soulful bridge winds up compromising Lil Cease, who is now well past his prime. A woman’s treatise with bullet points on cooking, independence, and family, the retread “Ten Wife Commandments” strips Big’s infamous drug-dealing instructional of its edge. Fortunately, the gritty element is restored by traditional architects DJ Premier and Jadakiss on “NYC.”

With The King & I, listeners get a glimpse of the potential impact an original Biggie & Faith collaborative LP could have produced. Unfortunately, moments like “Lovin’ You For Life” where Lil Kim shows up to rehash the elephant in the room that was their duplicitous romantic triangle come off inorganic — if not awkward altogether. Altogether a worthwhile concept that once deserved to see the light of day, excessive filler and intermissions dull the shine of a release should have been actualized while the public demand for Frank White vocals was greater.