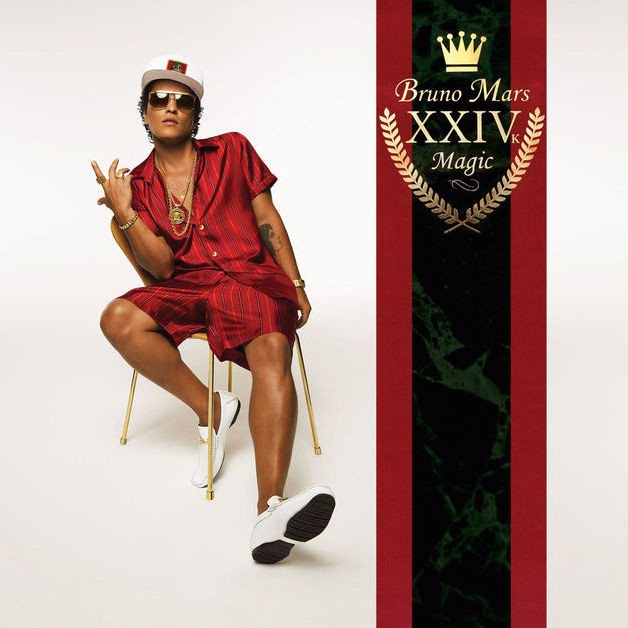 Anxiety is a mutha. Can you blame Bruno Mars for feeling entrapped by his own success? After netting a masterful opus like “Uptown Funk”, which garnered over 10 million downloads (and a couple of lawsuits), a bit of pressure rattled the pop icon. During the creation of his new album 24K Magic, Mars was worried about toppling his latest feat. Can we blame him? It’s like asking Jay Z to recreate The Blueprint. Nas to recreate Illmatic. Phil Jackson to save the Knicks. That kind of thing. Certain moments of greatness can’t be duplicated, but new stories can be told. With just the stroke of his pen, Bruno shattered his own expectations and handed us bangers on top of bangers with 24K Magic.

From the onset, Mars adroitly injects us with heavy doses of happy vibes that would make Pharrell Williams blush. The first single and title track “24K Magic” instantly pulls you in with its lushness and luminous sounds. Bruno’s indomitable swagger beams as he uses the intro track as his welcome back record after being away from the game for four years. “I’m a dangerous man with some money in my pocket/So many pretty girls around me and they waking up the rocket,” he confidently asserts.

After reminding us of his majestic swagger on the intro track, Bruno croons his heart away about finding that one sumptuous damsel he’s searching for on “Chunky.” He sprinkles a tinge of New Edition on this 80s driven-record, and makes a lustrous replica of “Candy Girl,” which screams hit-record. He continues his streak of homaging tunes on the bombastic and greasy record “Perm.” We can almost guarantee that every uncle and aunt will be bopping their heads at their upcoming family reunions to this heater.

On “That’s What I Like,” Bruno breaks out the strawberry champagne and ice bucket and promises to allow his leading lady to dictate the pace of the night. (“You deserve it baby. You deserve it all,” belts Mars.) And just when you thought Bruno couldn’t lighten the mood after providing endless turn-up joints, he slows down the tempo with “Versace on the Floor” and “Straight Up and Down.” On the former, he cajoles his lady friend to strip down and prepare herself for a night of heat and passion, while he dishes out some of his favorite bedroom tricks on the latter. “Calling All My Lovelies” finds the singer going through his Rolodex in hopes of locking down one of his lovelies before finding himself drowning in the land of unheard voicemails.

Throughout the album, remnants of Mars’ childhood heroes like New Edition, Boyz II Men, among other legendary acts from the golden age of R&B floats around and provides endless inspiration for the 31-year-old genius. He succinctly gets his point across by instilling that much needed old-school nostalgia lacking in music today with nine tracks. Instead of diving into the album with a bloated guest list, Bruno and his production team, Shampoo Press & Curl (with assistance from longtime collaborators The Stereotypes) ensure 80s babies stay forever young. Because of Bruno’s new album, vintage R&B has a pulse in 2016.