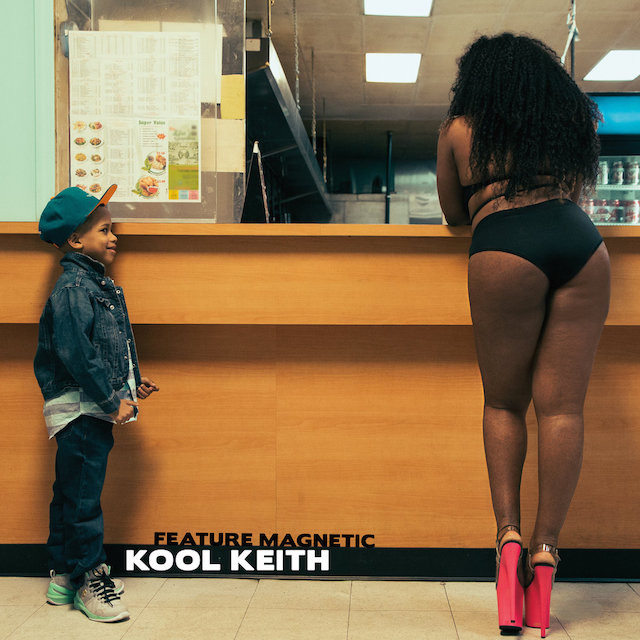 After 26 albums, eccentric rap Godfather Kool Keith’s showcases more lyrical funambulism above his rap peers while inching himself towards a date with a call girl at Burger King. On Future Magnetic, Keith’s channels Bruce Lee’s supreme “no style” philosophy to eliminate wack MC’s with non-sequiturs and stanza contortions across 14 tracks. The album, mostly produced by Keith under his alias Number One Producer, contains quirky beats that would inspire a Dadaist painter to play it as the soundtrack for their next art project.

The legendary Ultramagnetic MC maintains his penchant for tickling the Hip Hop cognoscenti’s collective funny bone with his ID chock-full of pop-cultural talking points (“put lingerie on Marie Osmond”), random sports references (“disguised like Phil Simms,” “Reggie Theus in the Prius”), and unmelodious choruses repeating the song’s titles like late schizophrenic singer Wesley Willis. With intermittent bars akin to the “Ministry of Silly Walks” skit from pioneering British sketch comedy show Monty Python, Kool Keith keeps listeners apace trying to pinpoint his next move forward. Yet attempting to reason his Freudian slips like “pull up in the Phantom with Pilgrims” is like a frisky kitten chasing a scribble-motioned red laser beam pointed at a wall.

From the first official track, “Stratocaster,” Kool Keith departs from the relaxed disposition in his last album Time? Astonishing and reverts back to his battle rap aggression on his previous releases. The jagged piano loop, duple-metered snare kick, and Transformers sample sounds like a duet between Thelonious Monk and Optimus Prime. Frequent collaborator Godfather Don plays clean-up like his role on Ultramagnetic MC’s 1993 underground hit “Raise It Up.” The second track “MC Voltron” featuring Juice Crew stalwart Craig G is a descent into the catacombs with a boom-bap, dark-horse tone perfect for a villain’s crew scheming in a 1980s action cartoon scene. Then the inevitable collaboration between MF Doom and Kool Keith “Super Hero” is the third blow to the head that knocks rap purist’s head’s back with a whiplash smile as the two longtime underground Hip Hop pillars’ oddball flows that make you rewind the track for brief moments of clarity.

The album’s first single “Worldwide Lamper” has a faint, atonal three-chord guitar lick and playalistic feel features newcomers Ba.R.S., Murre, and a hilarious, kitschy verse from Dick Nasty with a nasal tone that sounds like Telly from the film Kids (“The palette exquisite, my gynecologist makes sushi fried chicken”). The remaining standout tracks include the elegies “Peer Pressure” featuring Slug, and “Tired” featuring Boston luminary Edo G.’s take on that state of Black America (“I’m tired of cops that don’t love us/But I’m more tired of my brothers killing brothers”), and “Life” with Sadat X. “Bonneville” has Bay Area G-funk production that Kool Keith and Mac Mall share surprisingly well, and thirteenth track “Writers” featuring Ras Kass hold equal acclaim. Keith initiates in his verse on the latter with “I’m Batman on steroids/Rappers come with double-A batteries, I’m a grown man who plays with toys,” as well as an NBA All-Star claiming to “win the slam dunk contest in Timbs.” The track contains a shard of electronica with a sample reminiscent of Aphex Twin’s “Bucephalus Bouncing Ball” that Keith and Kass spit more flames to than King Koopa at Mario and Luigi.

Kool Keith’s Homie The Clown-style tangential delivery prompts fans to sing along like children without a clue of what they just heard. Despite his utter disdain for the rap industry’s contemporaries, Keith affectionately cares for rap music’s progression and his community. Even though he believes himself to be astrologically light-years ahead of rappers, he’s willing to drive a DeLorean DMC-12 back to the future to spread his gospel (“If you see a junkie kneeling, give him cold water and tell him little kids is watching, get up”). Keith’s magnetism is absurd yet inspirational to think different.