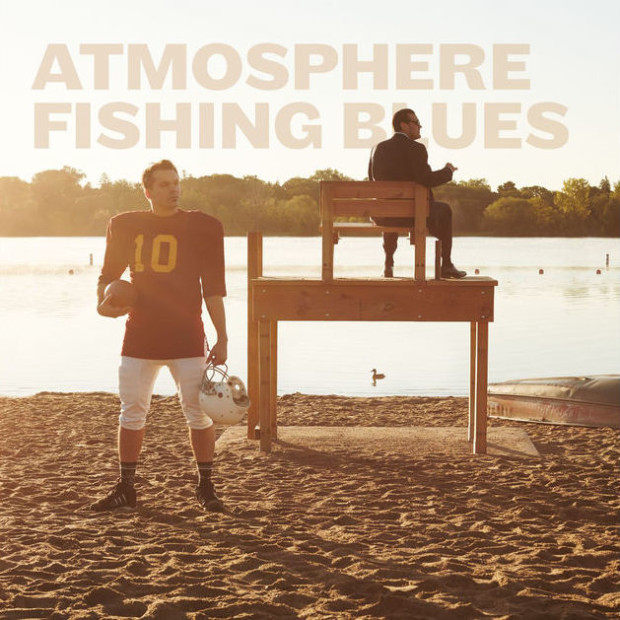 For Slug and Ant, the past 19 years in the game since releasing their first album in 1997 have cumulated into tremendous success. The Godfathers of the everyman rap genre have amassed a cult following and continue to define what independent success can look like. They’ve taken their own Rhymesayers Entertainment imprint to the next level with their own major festival, Soundset Music Festival, in their native of Minnesota. The duo has signed former major label acts such as Freeway and Dilated Peoples to releasing two Billboard 200 Top 10 charting albums. Now, after a two-year hiatus, Atmosphere is back with their latest album Fishing Blues.

Slug has carved out a very long, successful career over the emotive, mood enhanced and melancholy instrumentation of Ant’s production. The album opens up with “Ringo,” a cheeky 50’s, All-American inspired production that displays Slug reminiscing about summer days in the Twin Cities. On the flip side, he’s able to capture the angst of an entire society fed up with police violence with “Pure Evil.” Over a soundbed that could have been taken from a Django monologue, Slug tells the story of a killer cop through the eyes of the cop as the chorus chants, “I don’t believe you, this is pure evil.”

The finer points of the album come toward the end. “Everything” depicts how Slug never expected to be living the life he’s living and being thankful. Slug connects with bars like, “When I was younger I didn’t think that I would live for as long as I’ve been living it, and I ain’t saying I expected to die before that number got high just never deliberately considered it/go figure it”. “Sugar” displays Slug wafting through the perfectly placed keys and live percussion of Ant as he paints the picture of relationship woes. Ant is able to capture the essence of Slug’s struggle with his melodic composition of emotion stirring acoustics.

Where the album misfires is in its repetitiveness. Atmosphere could have better delivered their story across a baker’s dozen worth of tracks instead of the 18 that Fishing Blues casts its pole with. There’s nothing wrong with giving fans a full, robust album to whet the appetite but Fishing Blues grows redundant both sonically and lyrically with repetitive production and stories.

Much like the rest of their discography, the two-man team isn’t looking to reinvent the wheel. Fishing Blues builds upon the blue-collar rap subgenre they created nearly two decades ago. For fans of Atmosphere, this effort will rank somewhere in the middle of their discography. If you’re new to the group, Fishing Blues may not be your bag due to its pacing and down-trodden tempo but in between the suburban man bars should lay some appreciation for storytelling.