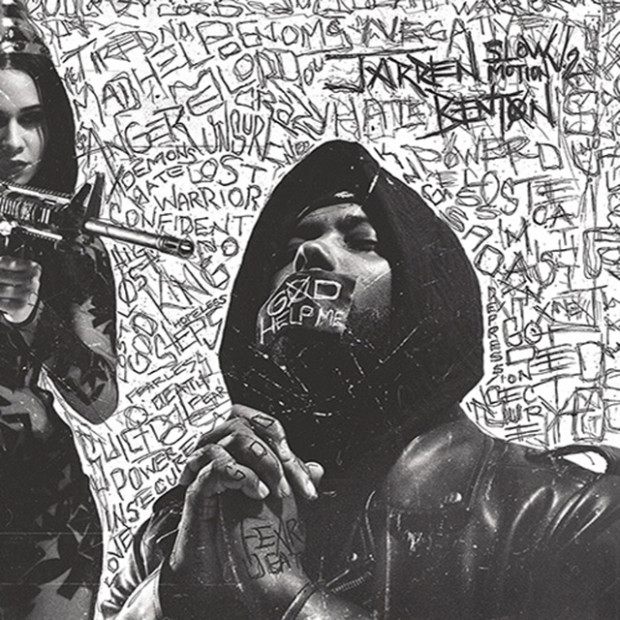 The last time we heard from Jarren Benton (musically), his former home label Funk Volume was still alive and kicking. That’s no longer the case, as disputes between label founders Hopsin and Damien Ritter caused the label to crash and burn. That hasn’t stopped Benton, though, who is back with a sequel to the 2015 EP Slow Motion Vol. 1. The question remains, is Slow Motion Vol. 2 any good?

The answer isn’t a simple yes or no. Slow Motion Vol. 2 has its moments but is too uneven to be enjoyable as a whole.

Let’s get this out of the way first: He does address Funk Volume. Several times, in fact. He repeatedly insists he has love for all of his labelmates, humorously spitting on “Smash,” “Whose side am I on, nigga, Dame or Hop/I murder both of them niggas,just name the spot/I be there in a flash with the stainless cocked/This Mr. Mink Coat right I leave you brainless Hop/I’m joking, still loving my brethren.”

Now onward to the music. Benton spends the first six cuts wilin’ out, rhyming at a breakneck pace about doing drugs, partying, and not giving a fuck with reckless abandon.

By the time the paranoia-inducing “Scared” rolls around, he switches up, opting for a darker, more reflective approach until the end of the album. Suddenly the drugs become an issue and the “Anarchy” takes the form of the life of a young black male fed up with police brutality.

This album’s crippling factor is its production, which possesses an otherworldly vibe, and most of the time that’s not a good thing. Screechy, futuristic beats ruin “WTFUTB” and “What a Difference.” On “Scared,” The Coalition’s horns and bells compete with Cue’s vocals on the hook for a suffocating feel. The same thing happens on “Dark Roads,” as The Coalition’s cluttered music detracts from Benton’s soul-baring lyrics.

The production isn’t the only issue. Conceptually speaking, Slow Motion Vol. 2. is an exercise in chaos. On “Bobby & Whitney,” for instance, Benton alters his voice for the worse and adopts a choppy flow. “Putting On” is a poorly placed song in between emotionally heavy cuts “Distant” and “Anarchy” that finds him aimlessly flexing.

When the songs connect, they fly over the wall like an Andrew McCutchen home run. “Lost Kings,” finds Benton lamenting the troubles of the ‘hood over 8track’s thick drums and stutter-step piano keys. “Niggas still waiting on God to skydive/Like that’s our only hope to stop these drive-bys” he raps. “Tec in the Church” opts for a more desperate approach, with Benton praying to God while clutching his gun. The imagery it evokes is nothing new, but the personal touch he and guests Locksmith and Joyner Lucas bring is. (“I was told to bring a tec to the church and a Bible to the trap/The only method that’s vital for survival is a strap/My little cousin was murdered I was stifled by the act/So when these niggas yap about violence I’m biased to they raps,” snarls Locksmith.)

Things commence on a subdued note, with Benton rapping calmly about his fallen loved ones while on the road on Statik Selektah’s funk-drenched “Miss You.” For nearly as many wins as there are like “Miss You,” there are songs that fall flat like “WTFUTB.” It’s a peculiar way to end such a roller coaster of an album.