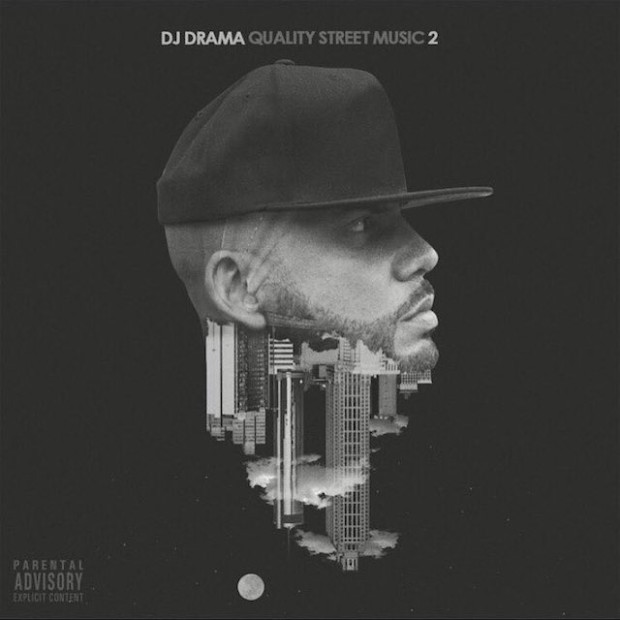 DJ Drama was a force in the 2000s with his successful Gangsta Grillz series and The Dedication mixtapes with Lil Wayne. His last album, Quality Street Music, was released in 2012, and among other things, he’s been on the grind as an A&R for Atlantic Records since 2014.

Now he’s back with the sequel, Quality Street Music 2, and he insists on the introduction that he’s still “got it” when it comes to facilitating hot records. Once again, he assembles a host of producers, rappers, and singers to collaborate on both gully and radio-ready tunes. Despite his efforts, QSM2 is an uninspired collection of stripper anthems and aggressive braggadocio.

“Intro” is promising, with Lil Wayne resembling a freestyling Tazmanian Devil that made him so beloved in 2008. Over an epic DJ Toomp beat, Wayne let’s loose with eyebrow-raising lyrics like “Them shoot at Tun’, that boy don’t flinch/I don’t shoot back, I pay for that hit/And wait for that call that say we caught that fish,” that sounds like a reference to the April 2015 shooting of Weezy’s tour bus.

Whatever hope is gleaned from “Intro” is quickly dashed by its predecessor, “Big Money.” Rich Homie Quan provides a pedestrian hook, and is even worse on his verse with rhymes like “You talk small, call it short guap/I eat beef like a pork chop.” Huh???

Things don’t get much better, as heard on hardcore songs like “Back and Forth,” which feature more of the same gangsta poses we’ve heard a thousand times before (“I don’t talk much, let the tool speak,” rhymes Skeme). The topics grow even more redundant, so that even a decent, slow-rolling stripper anthem like “Onyx,” featuring Ty Dolla $ign, Trey Songz and August Alsina, is forgettable the seventh track. “Camera,” featuring FKi 1st, Lil Uzi Vert, Mac Miller and Post Malone, is a song about filming sex – with the title word said 27 times in the song – and is painful to hear.

There are a few roses in the thornbush, however. “Body for My Zipcode” finds Young Life, Freddie Gibbs and Dave East on a relentless ride on League of Starz’s ominous beat with some eye-popping lyricism. “Finger fuckin’ my nina I’ll make you take a shit/Got a bag where your stomach used to be/And I ain’t talkin’ Billboard but my youngins makin’ hits,” Dave East spits.

“Can I,” with its drawn out, Atlantified organs courtesy of Lil’ C, is a dream of a tune. T.I. and Young Thug make the most of it, spitting nasty and nice about their escapades with the opposite sex.

The production is strongest on those two cuts, but is never really an issue. The problem is rappers wasting catchy beats from the likes of Honorable C.N.O.T.E. (“Onyx,” “Back and Forth”) and Cannon (“Big Money,” with C4, and “Audible”). The latter finds simple but ear-grabbing piano keys ruined by aimless rhymes by Atlanta duo WDNG Crshrs.

DJ Drama yelled over the first track, “I’m still here…don’t you ever forget it!” But, by the time the album closes with yet another subpar song, “Right Back,” this project instantly becomes a distant memory. QSM2 is an album that fails to make good on its name.