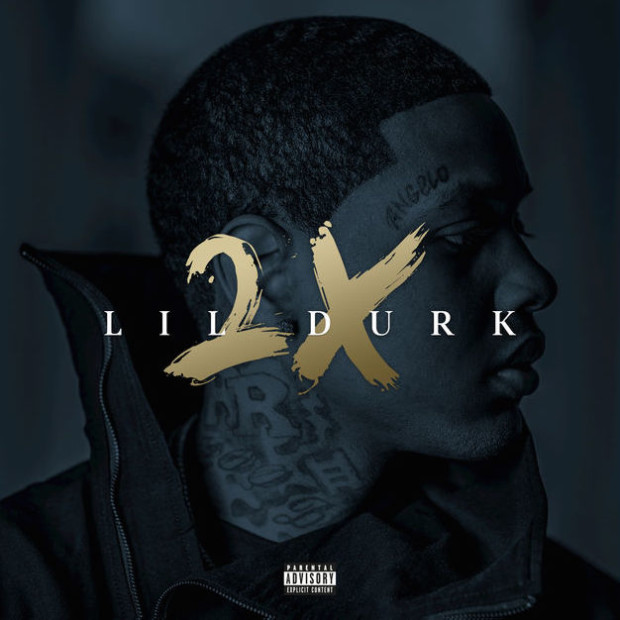 Lil Durk’s career has been a slow-burner to say the least. Riding in on the undertow of Chicago’s drill wave back in 2012, Lil Durk has managed to achieve moderate success over the past few years by putting out consistent projects and adapting to the times. Unlike a few of his Chi-Town cohorts, Durk has evolved his sound from gun bars and goons to popping bottles and Auto-Tune. However, since inking with Def Jam and the Coke Boys back in 2013, Durk has hovered in and out of rap relevancy with no real peaks or valleys. His 2015 single “Like Me” with Jeremih crept up to number 43 on Billboard’s Hot R&B/Hip-Hop charts but couldn’t totally catapult him into the bracket of success he aimed for, which is where his sophomore album LILDURK2X, picks up at.

After one play through of the 13-track LP, it’s clear that it’ll be another round before the OTF captain can breach mainstream success. Lil Durk can punch and flow, proving it with lines like “Shark in the water on the deep end/House in the hills like the Weeknd/Only like to party on the weekend” but other than a couple quotables here and there, the album is ultimately boring. Nearly every song is insanely alike pulling from a small arsenal of lyrical content and recycling them throughout. There are only two songs on the entire album that don’t mention the word “money” and those are “Glock Up” and “My Beyonce”. The former is too busy warning enemies that Durk and friends are “glocked up [for] homicide” and the latter is Durk’s serenade to girlfriend Dej Loaf. To make matters even worse, even though each track has a different set of producers (Zaytoven, Sonny Digital, Young Chop), the album’s beats sound dangerously similar to each other, following nearly identical drum patterns and digital drill bass kicks.

Unfortunately for Durk, he gets outshined by the features he’s placed on this album. Future out-croons him on “Hated On Me”, Young Thug somehow out-raps him on “So What” and Ty Dolla $ign steals the entire show on “She Just Wanna”. The latter may garner Durk some serious spins and buzz but for all the wrong reasons; Ty’s chorus and ChopsquadDJ’s instrumental carry the momentum. Durk does, however, save face on the Dej Loaf inspired “My Beyoncé”, where we see Durk put down the rifle and pick up a rose. The track even features an equally as affectionate verse from Dej Loaf herself. It isn’t exactly the most traditionally romantic track as Durk raps “We flirted for a minute, Dej, that’s my baby/I ain’t trippin’, I’m like Henny, yeah I’m in her kidneys” but Dej responds with the equally as explicit “I let him get it when he want it, knock it down and push up on it.” Who doesn’t love a good ‘ol fashioned gangster romance?

A crossover single aside, LILDURK2X, at its core, really lacks any unique personality. From song to song we just get served disappointingly mediocre aggressive rap music that is hard to hate but also challenging to love. There isn’t much here that separates a Lil Durk from the other 95% of Hip Hop currently doing that style. Hopefully on his junior album, Durk will be able to pull from other inspirations rather than money and haters, as his life has undoubtedly changed since coming up on Chicago’s Southside.