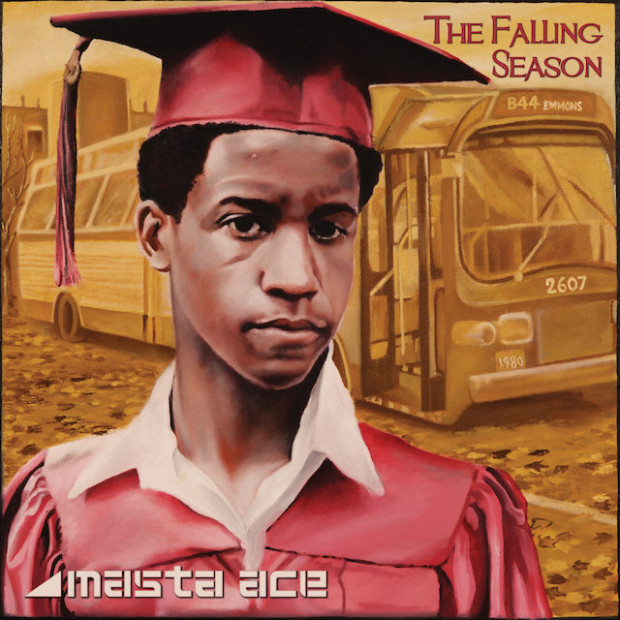 A 30-year tenure in any profession molds an undoubted master of a craft. Now on his eleventh studio album The Falling Season, Masta Ace, the punchline standard bearer, dramatizes a prequel of the time period when he began his path to the adopted persona that made him a Hip Hop legend. Ace shelves his braggadocio lyrics to supplant his social commentary and self-reflection a lá his 1990 debut Take a Look Around. Given the lengthy 24-track effort on Falling Season, much of the album’s production has an uneven sequence of beats that deters potential head-nodding, and the vocal deliveries sounds lethargic. Plus, the skits minimally resonate and could pass for a male version of Siri reciting scenes for the album’s cinematic efforts.

The record sets off with an introduction skit “Summer’s End” about how his fate was sealed when he and his mother reluctantly had to remain in the concrete jungle war zone within the Brownsville section of Brooklyn. He displays his innocence as Duval Clear experiencing his struggling single mother on the mend with little time and financial wiggle room to find him a safe high school to enroll him for the upcoming academic year. On the album’s first song “3000 Avenue X” featuring Young Old Droog, both MCs bring their bars to the table about growing up as good kids in Brooklyn’s desolate, crime-riddled streets where only the strong survive on their way home.

The lead single and album’s fourth track is “Me & AG” which features D.I.T.C. veteran A.G. and Ace giving stellar deliveries over a somber boom-bap beat, reciting as a chorus that pays homage to Ace’s prescient lyric “Once you hear the capital A/rap it’ll stay with you for awhile, it won’t go away” from the 1988 Juice Crew classic “The Symphony.” The details of his teenage psyche is wrought by relics of early 80s NYC including the inner-city busing of minority youth to suburban high schools throughout Brooklyn (“Welcome To The Bay” skit and “Mr. Bus Driver”), the formative years of the city’s bustling Hip Hop culture with the honorable yet somewhat cheesy old school sound (“Total Recall” featuring rap radio pioneers World Famous Supreme Team), as well as social milieu he explains going through his freshman year at Sheepshead Bay High School on the formidable “Young Black Intelligent” with a hefty spoken word from Chuck D, a calmly crooned hook from Pav Bundy, accompanied by the horn-tinged vibes from the Hypnotic Brass Ensemble.

Ace rhymes in a tone that empathizes his boyhood innocence to experience as the new kid on campus who holds this social acceptance as a precedent. Joining his high school football team, a pubescent shy kid crushing on a pretty classmate (“Juanita Estefan”) and a MILF (“Mothers Regret” featuring Queen Herawin), and his discovery of battle-rap ability (“High School Shit” featuring Torae), all play into his autobiography mission for the record. But he plays into his middle-age sounding like an elderly man packing a rusty old gun with his lyric “In my right coat pocket got a starter pistol/And I’ma pull it on anybody who’s got an issue” over the cheesy instrumental for “Bang Bang” with Cormega and Beej Gordy Brooks, which fails its attempt at a requisite posse cut for its pedestrian with its resounding multi-layered keyboards, making it too busy to digest the hardcore lyrics.

Having 24 songs on an album today would be considered as a double album, and it seems like an overkill momentarily on cut like “Mathematics,” “Story of Me” and the pointless “Outtakes” from the mistakes of the skits recorded, plus the majority basks in the melancholy. Yet this is still worth the time spent to hear Ace’s life story that he is luckily living to tell.