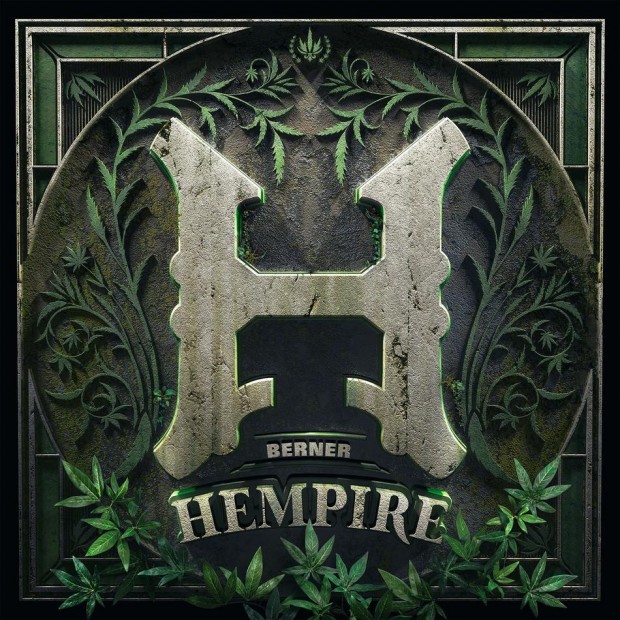 One of Taylor Gang’s most impressive attributes is their regional roster representation. Wiz holds down the East Coast, as does Juicy J in Memphis. Then there’s Berner, from the Bay (San Francisco to be exact). He signed on in 2012, and is already using his rising reputation to capitalize as an entrepreneur in other business endeavors. Accordingly, his knack for stoner music is manifested in a line of hemp water, one of many investments. Bottom line: he’s savvy, no matter the business.

Berner’s penchant for all things weed is evident on Hempire, but he doesn’t have a one-track mind. Hempire is rich in material; 18 tracks deep with a range of different moods. The length of the album enables something for everyone, albeit for better or worse.

Berner’s forte is the Bay Area style, from the beats to the flows. “Gunplay” samples Rockwell & Michael Jackson’s “Somebody’s Watching Me,” chopped and diced with a little extra bounce by Traxxfdr. That same vibe carries over and acts as a vehicle for non-Bay Area MCs to shine elsewhere on the album. “All We Do” represents a common ground for Berner and guests Juicy J and Wiz Khalifa, and the same can be said for “Best Thing Smokin” with Snoop Dogg and B-Real.

Sonically, the first movement of “Murals/Changes” is subtly akin to Kendrick Lamar’s good kid, m.A.A.d. city, with Berner flowing alongside Slug from Atmosphere: “Love me now not when I’m gone / Frisco shit I’m still at home / When my daughter leaves I’ma feel alone / I’m back in the streets where the killers roam / Still here in this crazy world / I gave my heart to my baby girl / Kingpin I touch weight for real / And been around the world like a Navy SEAL.” Capping things off is Mistah F.A.B., who steals the show on the second half, the end result being an eight-minute Hip Hop opera oozing with talent.

On the flipside, miscues on Hempire are equally apparent. The long runtime reflects Berner’s ambition, and occasionally, misguidance. “Burn One” and “Seal” attempt Taylor Gang stoner vibes, but flounder with Auto-Tune tracking and bland lyricism. On “Cream,” Berner tritely visualizes a dream of selling coke and living like Tony Montana, and the content and expensive production can’t comfortably mesh. His alternating styles are impressive, but moments of transgression are a bit too frequent.

Eighteen tracks provide more of a net positive than a negative for Hempire, with adequate displays of range and diversity. One can’t help but wonder, though, if it would play as a more concise whole with fewer songs. Berner’s lyricism is solid and consistent, as are the slew of guest producers and their beats, but true greatness is sparse on an album with so much to offer.