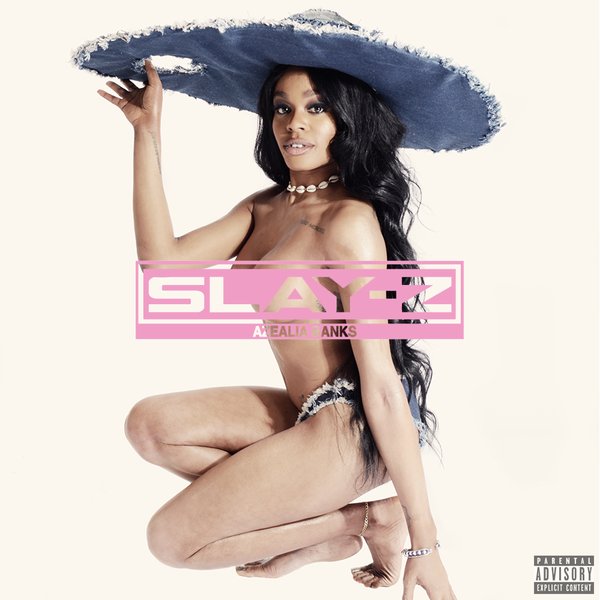 If it is ever discovered that Azealia Banks once brandished a fake ID with her middle name being listed as ShockValue, it would pretty much be a non-story. Take her latest freebie, Slay-Z, for instance. It serves as the spunky Harlemite’s first full project since she announced her music rights were 4080’d for a hot second and arrives with several outliers that don’t have anything to do with the actual tunes. Its release comes on the heels of dozens of social media disputes and physical confrontations in real life and her percolated candies yams on the front cover were certainly used to draw attention–good and bad–to the project. Yet Banks has the uncanny mutant power to continuously alienate would-be fans to her music and make them believers all in the same swoop.

If there’s one aspect her new tape nails, it’s the likening of its titular inspiration to the actual music. It wouldn’t be hard to imagine a one Shawn Corey Carter illuminating a sold-out arena with the glitz of “Skylar Diggins” (shameless Roc Nation plug and all), complete with a sedated head nod behind pricey wayfarer lenses. Her militant commands of “Niggas, bitches, killers, bust that/Hustlers, ballers, gangstas, hoes…New York City, you with me, let’s get involved” is done in classic Jigga fashion, alongside Fame School’s neo rap-rock production. Elsewhere, she sounds mighty comfortable trading M-M-M-Maybachisms with Rick Ross on “Big Talk,” another robust selection that scores points within the realm of conformity. Those concerned she abandoned the versatility her first album had her haters copping pleas need not fret as the retro house and new jack currents of “The Big Big Beat” is a fly reminder she can be the Jill of several trades in the studio.

Ironically its such musical ambition that causes filler to plague even a lean eight-track expo. “Used to be Alone” comes off as the C+C Music Factory reunion no one asked for as Azealia shows extensive range belting high notes, drowning out an epileptic seizure of techno disharmony in the process. EP anchor “Along the Coast” also sore thumbs things with a breezy, island-tinged two-step supplied by Kaytranada that would have found a better living arrangement on a not-so-scattered project.

Only the irrational will accuse “She-Of-No-Filter” of not having any skills but the lingering challenge is for her to create a complete body of work that will eclipse anything she does offline. Slay-Z isn’t quite such a project but her talent is still apparent throughout its run time.