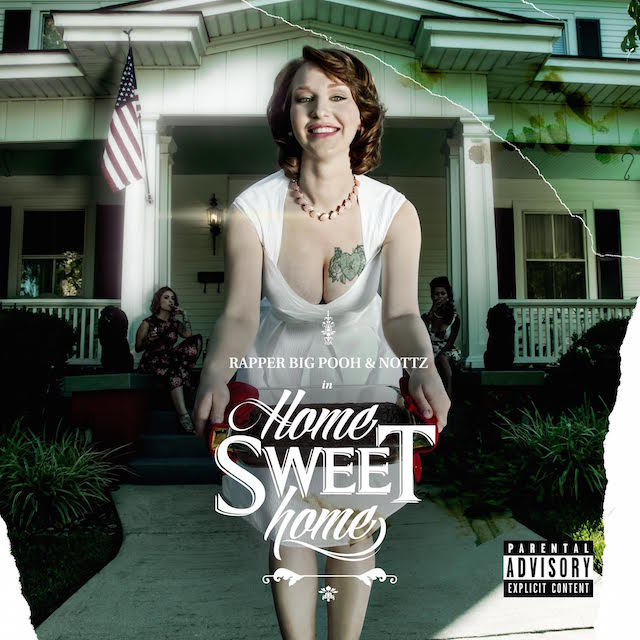 For years, Rapper Big Pooh had to fight the reputation of being second to Phonte, his Little Brother counterpart. In recent outings, though, he’s asserted himself as his own person and an above-average emcee who’s only looking forward, not backward. In fact, Pooh hasn’t regressed even slightly since the Little Brother split. He’s released a slew of albums, and collaborated with noteworthy producers; first, it was Roc C, then Apollo Brown, and now, for Home Sweet Home, he has Nottz in tow. Together, this well-respected emcee and producer pairing meshes like PB & J on an album that’s authentically underground, yet still appealing for anyone who appreciates good Hip Hop.

The Little Brother Big Pooh was chilled out, and a fitting yin to Phonte’s yang. Solo artist Big Pooh, though, is more outwardly confident, with more of an authoritative tone; he demands your attention. This, coupled with Nottz’s bangin’ drum tracks and intricate sample loops, make for music that begs to be played loudly. Thirteen tracks with relatively short runtimes enable Home Sweet Home to play smoothly from beginning to end. There aren’t many songs that stand out on their own, which is by no means a bad thing. In the grand scheme of the album, they sound best in unison.

Lyrically, the album is rooted in nostalgia, with Pooh recalling adolescence, high school, and growing up in general. The second track, “Welcome Home,” runs for just 1:26, but that’s enough time for him to provide a vivid exposé of time and place: “Grandmama saying I look better with some weight off / Kissed her on the cheek / My grandaddy throwin’ out advice when he speak / Made my way to the kitchen / Mama cookin’ up collard greens, fried chicken / Macaroni cheese, candied yams, you know the menu / Shall I continue? Yes, I will / Being home is such a marvelous feel.” Pooh isn’t prone to storytelling, but he does provide a powerful visual with his lyrics. “Prom Season” deals with the humorous coming of age strife, sexual tension and nervousness of the big night, while “Alone,” is a melancholy ode to a past romance. Kurt Vonnegut once said, “High School is closer to the core of the American experience than anything else I can think of,” and Pooh capitalizes on this very sentiment in a most comforting, poetic way.

Pooh’s lyrics resonates with the listener for a number of reasons, though Nottz’s production absolutely plays a role. As the album ebbs and flows, the beats only get stronger. For some producers, the Golden Era scratch-and-cut beats still prevail, while others are opting for the Metro Boomin mode of sound. Nottz strikes a nice balance between the two, with beats that are still predominantly drum-driven, but not entirely what we’re used to. “Fries” is laid back smoke out music, while the catchy saxophone solo that rides out “Prom Season” is a rare instance of live instrumentalization. One of the more prevailing themes of his production is the layering of multiple tracks (“Home Sweet Home”), which offers a glimpse into the complexity of Nottz’s musical ear, and also provides a sufficient vibe for Pooh’s club night-gone-wrong story-rap.

The subject matter of Home Sweet Home isn’t necessarily as personal as it is relatable, especially when conveyed vis-a-vis its cinematic tonality and lyricism. Pooh shines with some of his best writing to date, and Nottz provides an array of different beats, carefully constructed, and each uniquely their own. What the future holds in store for these two as a duo remains unknown, but in the meantime, fans can revel in the music brought about by their mutual spirit of admiration.