The Underachievers - Evermore: The Art of Duality 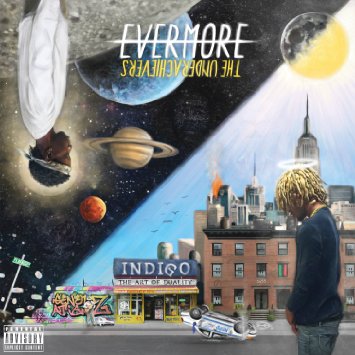 It’s honestly not hard to understand how subjects of spiritual enlightenment, new age psychedelia, and building up ones own philosophy to live by would fit well into new school Hip Hop. With the genre becoming less of a rebellious voice, new artists naturally seek out ways to challenge the systematic status quo. Since their debut mix tape Indigoism, The Underachievers have seemed to do this better than just about all of their peers, combining rough, sometimes warp-speed lyricism with aerial and ethereal production. And while the results can be hit or miss, this mixture has helped to win the duo a well-deserved loyal following. Building on a healthy wave of spacey, topical music, Evermore: The Art of Duality continues the Brooklyn twosomes string of thought provoking, challenging Hip Hop.

The concept of opposites fighting each other for space is prevalent throughout Evermore, which is divided into a lighter, more enlightening and spiritual side, and an opposite side that is much bleaker and focused on instant gratification. But the success of the album doesn’t come merely with presenting both sides as separate of each other. Rather, it’s that AK and Issa have worked hard to present just how messy, conflicted and confusing the human condition is these days. Good and evil, right and wrong, they are not mutually exclusive of each other. Essentially, the darkness seeps into the light, and vice versa.

It’s a motif that The Underachievers have made sure to weave throughout the album. While “Shine All Gold” is extremely personal and touching as Issa speaks on addiction to hard drugs and prescriptions while in high school and AK speaks on being part of a gang, “The Dualist” presents a Jazz Hip Hop-fueled, smoothed out rage against first world problems: reality television, social media addiction and the dangers of living one’s life through these tools. And this is still on the “Phase 1” side, which ends with the positivity of “The Brooklyn Way” and its chants of “hands up if you live for love.”

The darker turn comes once “Reincarnation (Phase 2 Intro)” comes on, leading into the drubbing, pounding intensity of tracks like “Take Your Place” and the hypnotic, turn up debauchery of “Allusions.” But these emcees still do a descent job of intermingling the good with the bad, purposely blurring the lines between the two. And that’s the whole point of Evermore. The Underachievers make very plain that the world is much more complex than good and evil. This is done by AK and Issa weaving a little bit of each side into the other to let the listener know that nobody, including themselves, can ever be entirely good or evil, but that we all have the potential to be either at any time due to what we have been taught.

Even with all this ambition, Evermore does falter. In essence, the project would have been better served as an EP, as the good and evil theme runs long and wears thin. Much of “Phase 2” starts to sound frustratingly similar after a while. And while both AK and Issa are respectable emcees, they’re not quite strong enough to carry the listener through the parts that start to drag on and on.

But, you have to give it to The Underachievers. They continue to make music that is energetic, aggressive and purposeful. That’s more than can be said of some of their contemporaries. Evermore: The Art Of Duality is an album that might overstay its welcome once it’s finished, but it is a project that takes an old concept album idea and breathes new life into it while, concurrently making the talent and the rep of this against-the-grain Beast Coast duo grow bigger with each new release.