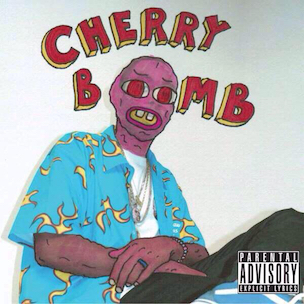 Rumblings of Tyler, The Creator’s third official studio album predate even 2013 when he was prepping the soon to be critically acclaimed album Wolf and critics were still struggling mightily to brainstorm a cute epithet for an artist the world had yet to witness. Thankfully, those struggles have ceased, and on the heels of the accolades Earl Sweatshirt is receiving for I Don’t Like Shit, I Don’t Go Outside and the insane level of hype awaiting the release of Frank Ocean’s second album, now seems a more fitting time than ever for Odd Future’s bandleader to release the long rumbled about — Cherry Bomb.

For the majority of Hip Hop artists, where ad-libbing in the safetynet of musical trends is their bread and butter, an album concocted sporadically over such a long stretch would wreak havoc on any sense of semblance of cohesion in the music. But for better or worse, Tyler is consistently trumping the opinions of tastemakers. Cherry Bomb is less theme-based than past releases; rather an amalgam of the artist’s varied ingenuity to date.

The shock raps casually exploring rape and homophobia found on early projects such as Bastard and Goblin have quieted down this time, allowing Tyler’s motley-inspired musicianship to truly flourish. The instrumentals are designed as the main attraction, and at times the lyrics are distorted to the point of being barely intelligible, similarly to 2013’s Wolf. “DEATHCAMP” renews his admiration for Pharrell, almost eerily similar to the In Search Of… era of N.E.R.D. The opener performs the same buy-the-ticket-take-the-ride function as Kanye’s “On Sight,” a remorseless execution of the artist’s vision rather than the audience’s expectation of what the music should sound like. Tyler enforces this disposition on every turn.

Tyler makes himself heard on “BUFFALO,” fusing boom-bap-minded rhymes with choppy, bass-heavy instrumental. The subtle permutations of Cherry Bomb’s sonic palette, like the intermittent piano strokes found in “PILOT” or the fuzzy synths of “2SEATER” sometimes make for a cumbersome challenge in the digital age.

After the onslaught of airborne synths and gnarled stabs, the explosive instrumentals of Cherry Bomb ease into a temperate climate. A jazzy mesh of xylophone, piano, saxophone anchors Tyler’s harmonizing on “FIND YOUR WINGS,” more of a serene interlude than an arresting track. Tyler’s most tour de jazz is accomplished with “2SEATER,” which features a heavy dosage of bars buffeted on a lush instrumental.

As the Odd Future brand gained steam around five years ago, fans wanted to see the members branch out and collaborate with other artists. Although these wishes have been granted long before Cherry Bomb, a track like “SMUCKERS” justifies these demands. Kanye West, Lil Wayne, and Tyler each bring a distinct degree of creativity to the table, and yet their collaboration organically registers without either artist having to calibrate their respective styles. The guests are in top form, vibing well against the backdrop of spacey synths and Tyler’s perennially angry flow.

“OKAGA, CA” is the plush, tranquille finale to an album that seems to ebb and flow all over the place. Although it’s a proper representation of both Tyler’s past and present, Cherry Bomb may be a tough pill to swallow for some diehard fans who may not be able to stomach the more contemporary movements, in most instances the seemingly wayward direction of the album after a few straightforward spins. At this exact moment, Tyler is probably preparing to post grotesque alien drawings to his Instagram account, but musically, he is maturing before our very eyes.