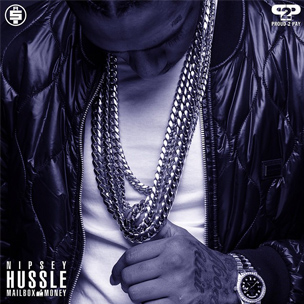 Nipsey Hussle has more than two cents worth of opinions regarding the considerable amount of acclaim his 2013 Crenshaw project received. With an attached price tag of $100, Hussle had no obstacles whatsoever in selling the 1,000 first edition copies of the tape, even auctioning 100 copies to Hova himself. Scarce is the rapper who can successfully orchestrate such a stint, especially in an age where free music is endless, but Nipsey is a rare breed. Ever since he founded his own record label, All Money In, Hussle has continued to improve upon every release, from The Marathon to The Marathon Continues to Crenshaw. Once again employing his Proud 2 Pay campaign, Nipsey announced that he would be releasing 100 physical copies of Mailbox Money to anyone willing to part ways with a $1,000.

Monetary value aside, Mailbox Money is the sort of mixtape that performs circus tricks with ease. Nipsey bypasses the often times problematic route of exceeding the expectations of long-time admirers while simultaneously extending a warm welcome to potential new listeners. Hooking up with a familiar face for the intro, Ralo provides the instrumental for the Nipsey’s commencement ceremony. The Crenshaw native assumes his customary manner — austere, energetic, and wholly cocksure while never letting the display of his humble beginnings receding in his rearview dissipate in light of his successful accomplishments. He delves much deeper into this ideology on “A Miracle.”

Nipsey is typically at his best when he fuses his animated delivery with the signature West Coast sound— cooled melodic grooves and thumping bass perfect for lowered car windows and excursions through Rodeo Drive. Tracks like “Only A Case” and “Status Symbol,” the latter featuring the soulful pulpit vocals of Buddy are prime examples. Inarguably one of most dexterous artists when working with DJ Mustard, “Where Yo Money At?” is the addictive product of two talented musicians embodying inherent chemistry. But even through less likely collaborations, such as Trae Tha Truth’s fiery flow on “No Nigga Like Me” Nipsey proves not only his affable creativity — he can get along with almost anyone on wax, especially against the backdrop of a lusty bassline courtesy of THC.

On tracks like “Between Us” and “Count Up That Loot” Nipsey crafts songs that would correspond with even the most neo-payola minded executives. On the latter Nipsey spits: “I’m Suge Knight, I’m J. Prince / Nigga, fuck the rules.”

Throughout the duration of his career, Nipsey has used his music as a vessel not only for providing high-caliber car stereo music but as a way to probe deep into worldly issues bigger than the music itself, like “Who Detached Us” from The Marathon Continues that featured a famous speech from Steve Jobs. Aside from the late 2pac, most artists struggle when they attempt to make real talk songs that touch on real issues, but Nipsey has a natural gift of delving into this territory without sounding contrived or disconnected with the streets. “That’s How I Knew” affirms his distinguished hustler disposition but interjects with a monologue on his own feelings regarding the explosion of the present-day technology revolution. “Stay Loyal,” featuring J. Stone, Nipsey toe-tags a spaced out flow on a crisp, slap-happy instrumental from THC for a penetrating testament to loyalty. But Nipsey halts his spirited lyricism in favor of explaining his own “equity” model in layman’s terms.

The occasional bumps in the pavement are the minuscule but noticeable blocks that keep Mailbox Money just shy of a true victory lap. For instance, a promising start to “A Hunnid A Show” temporarily cools momentum as a plodding beat engulfs the penetrating flow of Nipsey and the dialed-in one of Rick Ross, and the beat only meets its true sonic potential in the waning seconds. The wayward, colorless hook on “Be Here For A While” dampers one of Nipsey’s best performances of the tape and unfortunately spoils a smooth, g-funky Polyester beat.

By now, it’s safe to say Nipsey is not in the game to cash in on a couple of ringtone downloads. His resolute demeanor is meticulously infused in every passionate bar. Mailbox Money is a tale of a man with an unquenchable ambition not only to reach the highest financial plateau possible, but the highest stage imaginable to secure a big enough venue to share his myriad social insight with the world . Fittingly enough, Nipsey and Rahlo link up for the finale “Overtime,” where the rapper succinctly reinforces his ambitious psychology over a minimalist instrumental: “Maybe me, I’m too ambitious/ Or maybe this a new dimension/ Maybe them they do religious/ Maybe that just my intentions/ But either way I’m on my mission.” The line is not only a gift-wrapped blurb of who Nipsey Hussle is, but ultimately what Mailbox Money comes to represent when all is said and done.