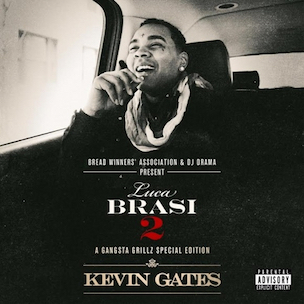 After rapping about earning a college degree in shackles, likening his lover to Nala from The Lion King and remembering how his friend’s blown-out brains fell in his lap on “Perfect Imperfection,” Gates lays out two options (in case you don’t like him) in husking, emotive baritone: “shut up or kill me.” It’s one of the strongest moments of Luca Brasi 2, his sixth full-length since 2012, and it’s steeped in the ethos that makes Kevin Gates one of the most inviting artists in the world right now. If you’re not doing something with every heartstring committed to it, then keep to yourself. Luca Brasi 2 presents that mantra with stunning fluidity, and it may be Gates’ best project to date. The hooks are more anthemic and vulnerable than the preceding By Any Means, while the surly double-times are rivaled only by the original Luca Brasi Story that propelled Gates to nationwide recognition.

Rarely if ever do Gates The Convicted Felon and Gates The Nicholas Sparks Fan diverge. On “Plug Daughter,” clinking synths and a mafioso victory lap are abruptly pulled from under him, replaced only by muffled bass and a two-part harmony as he intimately creaks, “Sometimes I feel like the cameras is watchin’.” A skulking Gates bullies the horror score of “Sit Down” for three minutes before he confesses to crying to Drake and Rihanna’ “Take Care.” And project finale “Making Love” finds him shouting out friends and plugs until a frantic wail of, “Calling out to the creator / That earnings will come from a bundle, whatever / In the cell I can see all the pain in his eyes / And I wish I had somethin’ to tell him,” creating a tumult large enough to bridge the gap between Baton Rouge and wherever Kevin Gates is destined to go next.

Luca Brasi 2 is cohesive, due to both consistently ominous production and Gates’ pliant verses that unfurl melodic introspection between drug talk culiminating in genuine moments of introspection for the emcee. The ability to snap so seamlessly is what lets Gates snatch the hook of “Complaining” away from Rico Love halfway through it, flourishing in a DMX like naming session and outright take a hook himself on a song featuring August Alsina. “I Don’t Get Tired” is a predictable name for the mixtape’s lead single after the phrase became his signature sign-off on Instagram videos, but it serves as a memorable beginner’s guide to Kevin Gates. Complete with confessions (“Full time father, full time artist / Asked God, he said ‘grind harder’”), kingpin imagery (“Six weeks ago I just purchased a foreign / Most likely the one that you cannot afford”) and a love story that avoids triteness at all costs (“Me and the woman I love on an air mattress / We share a cot, my hair nappy / Couldn’t afford flights, no air travel / Stale Rice Krispies like sand and gravel”), “I Don’t Get Tired” is the ever-elusive street single that appropriately represents its project, and the track is littered with enough claustrophobic energy to almost forget Alsina’s prescence.

Nocturnal vibes are embedded throughout the rest of Luca Brasi 2, and unsurprisingly, a nighttime backdrop is most flattering to songs that emphasize a psychoanalytical mind in a dope boy’s body. The whirring “Talk On Phones” makes Gates’ chest-out paranoia all the more chilling, and the club-made 808s of K Camp-assisted “Break The Bitch Down” liquor up smirks like “Out of town for the weekend / Accompanied by three friends / I’m supplyin’ all y’all drinks then.” But the strongest cut of Luca Brasi 2 is pure morning-after soul searching, and a radical departure from the rest of the project. “In My Feelings” airs out the bullshit of hypocritical pastors and two-faced love interests, and takes multiple listens to fully untangle the love, distrust and impulsivity that linger throughout the project but peak over languid soul.

Luca Brasi 2 is 18 tracks, features just one guest verse and somehow runs without DJ Drama interludes, but the explosive Gates ensures that there’s never a lull in the story. Averaging two projects a year now, Gates clearly doesn’t get tired, and Luca Brasi 2 only proves that he’s getting better.