Kevin Gates - By Any Means 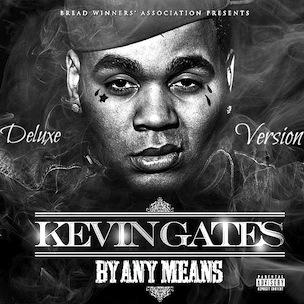 Kevin Gates spits of playing dumb in the slightly hypnotic “Amnesia,” off his new mixtape By Any Means. While the late Doe B lazes around his condo and shrugs when asked of his Rihanna lookalike’s name, a panicked Gates storms in and spills of how a fairly quiet night—a girl, twerking on him—escalated to a drug-ring operation gone wrong. Yelling, his flow quickening, he recalls pleading the fifth as if he’s still bolting from the scene: “Two shooters, you dummy / I’m coming, get the money / Got a bankroll in this bitch / Amnesia, I have that shit / Ask anything, I forget / Quick!”

Just one year ago, the Baton Rouge, Louisiana, rapper was eager to indulge his every whim, from spells of Reggae leanings to a Twilight series tribute, on his breakout mixtape, The Luca Brasi Story, released in 2013 before he signed to Atlantic Records. But in his first interview following his most recent jail stint, a matter-of-fact Gates was brief. “There wasn’t no reaction,” he told XXL. “Just, let’s get it. Let’s do it,” he said of going back. He was all business, just as he is in By Any Means—a smart display of his skills that aims for Rap radio airplay but doesn’t sacrifice too much personality, and a reliable stopgap between now and what’s ahead.

By Any Means contains songs as concise as Stranger Than Fiction‘s lyrical exercises, though as a writer, Gates tends to disregard bar-for-bar precision in favor of narrative twists and turns. To piano chords and a gravitas of The Young & The Restless’s theme song, Gates anchors highlight “Homicide” with a mournful hook—he’s praying it doesn’t amount to that—but lurches forward when he exacts his revenge for a slain friend, whose children were left “on this earth to be bastards.” In “Can’t Make This Up,” he likens his life to a movie (as most Rappers do) but personalizes the trope with his stream-of-consciousness delivery, pedaling through endearing confessions of his drug use (he hasn’t tried molly but guesses that coffee’s comparable) and grandma’s nightmares (of him getting locked up and shot).

This mixtape does catch him at a rare weak moment, underscoring what’s next at stake for Gates. When teamed with its biggest gets Rico Wade (the schmaltzy R&B ballad “Go Hard”) and 2 Chainz (the punchy “Bet I’m On It”), Gates defers to them as if he’s starstruck. It’s a shame, as the rest of By Any Means provides damning proof of his star quality. He shifts between crowing and sounding dead-eyed in “Arm & Hammer,” a [t]Rap anthem as bombastic as Meek Mill’s “Believe It.” In “Movie,” he seems to melt as he chirps of how his life changed after the birth of his second child, with as much yearning in his voice as Peter Gabriel in Genesis ballads.

By Any Means is a lean 56 minutes, though Gates still finds room to entertain his schizophrenic tendencies. Consider his personal favorite, “Posed to Be in Love,” where he croons but also threatens to “toilet-bowl drown” and beat a woman up like Chris Brown, when he discovers that she cheated on him. At the occasional screams, “Posed” vaguely echoes the odes to abusive relationships by a Rapper who Gates admires. A year after he included an Eminem tribute in The Luca Brasi Story, “Posed to Be in Love” helps emphasize that “Marshall Mathers” may not be wishful thinking for much longer.