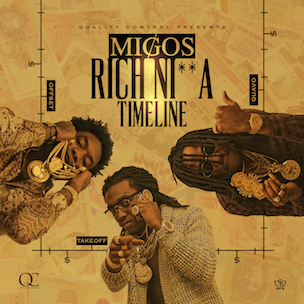 Migos’ latest album-length mixtape Rich N*gga Timeline is actually a line in the sand between Generation Xers getting older and Millennials finally having their style, culture and voice being seen and heard in the mainstream. In representing the best of (what has long been perceived as) the worst at the most intriguing of times in the music industry overall, it’s a mixtape that deserves a listen. Furthermore, if seen through the right prism, it’s actually outstanding.

If you’re not a fan of Migos, you’re actually part of the secret to their success, which is to say they’re following a formula that is almost 20 years old for Atlanta Pop/Rap domination. In 2000, it was Ludacris who kicked things off; his album Back For The First Time assaulting the mainstream’s airwaves with braggadocious, crunk, club-ready and champagne soaked sex raps. In 2003, T.I. hit the scene; his album Trap Muzik introducing the term “trap,” as well as southern-fried drug raps to the mainstream Hip Hop cultural lexicon. By 2009, the Atlanta rap mantle had been passed to Gucci Mane, as The State vs. Radric Davis re-set the bar for Ludacris’ lyrical themes, Tip Harris’ gunplay and cocaine dealing now figuring greater into the mix. Now, in 2014, it’s Migos, the trio of Quavo, Takeoff and Offset blending the skills and styles of three of rap’s most dominant modern era emcees into a strange, sing-song mix that while controversial, is also proving incredibly successful.

Lyor Cohen’s 300 Entertainment footing the distribution bill for Migos’ Quality Control Music is an incredibly brilliant business move. While this mixtape bears no “Versace” or “Fight Night,” as a cohesive product there’s a level of growth that truly makes the trio worthy of attention being paid. What has happened here isn’t that there’s someone behind the curtain writing their bars, nor should we suspect there’s someone helping their enunciation and breath control, too. Confidence is a helluva drug, and on top of the Actavis they’re sipping on every other bar of tracks like Atlanta producer Deko’s minor key synth-laden, trapped out trunk-rattler “Hit Em” is a sly, sensitive play on language. Quavo’s not advocating for civil rights or black liberation, but he is quite adept at telling stories about his crime-ridden youth and using the rap industry’s most popular flow-of-the-moment. If wanting bars that discuss positive or less violent themes, drive west 400 miles to Mississippi and Big K.R.I.T. will be happy to give you what you need.

Plain and simple, this mixtape is a collection of 18 potent tracks if you’re trying to do hoodrat shit with your friends. Of course, Rap’s at a place where throughout the mainstream, every top-selling Rap artist from A$AP Ferg to Waka Flocka Flame is turning up. The one differentiator with Migos is that they have access to top-tier production, and also still continue to live the life discussed in the gritty, honest and oftentimes absurd street stories they tell.  Brick Squad veterans like Zaytoven are present, as well as a plethora of rising names in the new Atlanta sound. The aforementioned southern rap legend produces the title track, as well as “Move,” “Naw FR,” “Nawfside” and “Struggle.” WIthout counting this mixtape, Zaytoven likely has 500-plus album and mixtape credits in his near 20-year production career. There’s nothing dissimilar here, but there’s a certain soulful groove that he hits in choruses that really gives them the swing, making a seemingly generic trap rap track like “Rich Ni**a TImeline” into a lead single.

Final mixtape track “Struggle” represents what may be the most noteworthy Migos song to-date. Zaytoven dips deep into the FATBOI/Gucci Mane “Wasted” playbook for crossover success. The track could just as easily be an earnest top-40 R & B hit single for Anthony Hamilton, but instead, three chain-snatching, promiscuous, drug-dealing trappers become champions of the urban struggle. A theme for these days voiced by three artists so many admonish, it belies every notion that has ever been attributed to the group. Migos’ major label debut album Y.R.N. 2 is due in February 2015, and if some of the material meets this level of quality, it bodes well for what could be a well-rounded rap-release that’s primed for both deep listening and the bow-throwing that could define the following twelve months.

There will come a point in the next year where journalists and Rap fanatics who hate everything that Migos supposedly stands for may be forced to stand aside. In this oftentimes misunderstood trio, is the DNA of much of what we love about Dirty South Rap. In just extending a two-decade progression into a wild and seemingly unstable Pop music future, Migos’ embracing of a long-established standard may prove that what was needed to cure an “ailing” industry may have been here all along.