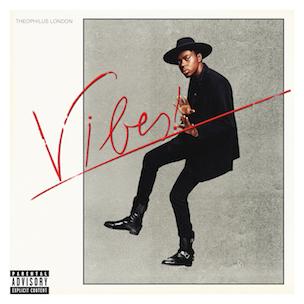 What is Vibes about? It’s either the most or least important question to ask, depending on how the listener digests the eclectic second LP from Brooklyn-based, Trinidad-born Theophilus London. On a macro level, the project rings of liberation. When you really get into what all that means, Vibes is about lovers, dinners at MOMA, clubbing with the art world bourgeois and keeping your herringbone on throughout. Or, as London recently put it, “Hit some mushrooms, go to Joshua Tree, bathe in some motherfuckin’ volcano water…Shit like that.”

Water Theophilus London and he will grow, he says on the opening track. Past projects were maligned for place-holder lyrics, cheap sentimentality and an excessive concern with aesthetic — the Brooklynite’s adoption of TV On The Radio, The Smiths and Prince, in tandem with his many forays into fashion, had him spread too thin. But with two years off and Kanye West behind the boards, Vibes offers a tighter, razor-sharp London who fuses at least five different genres on a dozen songs without ever veering out of his lane. Visceral, the album is rarely concerned with consequence, and its polished genre bending makes the title fitting.

The moods of Vibes move quickly and with purpose. “Neu Law” finds London peering over his shoulder as he delivers a desperate plea for escape over Kraftwerk-inspired blips and bloops. Escapism sounds different just one song later on “Take And Look,” where he chants “All I want to do is dance / Electric lights,” before an Afrika Bambaataa-like transcendence of language with repeated wails of “Ramabama.” The idea of escaping physical spaces is prevalent on all 12 tracks; London’s head says no, but the girl downstairs says yes on the disco-paced “Heartbreaker,” he brings a horde of women on flights overseas on the robotic funk of “Tribe,” and is “running away from [him] self” as a relationship hits a wall on “Figure It Out.”

Though few come to Theophilus London for lyrics, the 27-year-old’s songwriting has improved immensely — London blends a facetiousness and smoothness on lead single “Can’t Stop” — but Vibes is first and foremost about production. Perhaps the most enjoyable part of the album comes on “Get Me Right,” when London swears that he feels the force taking over, and then on cue, synths explode and percussion drops to reveal a planet-sized hook. Equipping London with the slow burn of “Figure It Out,” haunting guitar riffs of “Do Girls” and sun-drenched “Can’t Stop” given London the backdrop needed to show off his incredible versatility, which is backed by London’s impressive Rolodex of features. “Can’t Stop,” the album’s strongest track, finds Kanye smirking about fake tits, trips to Palo Alto and getting head in the pool with no shortage of shameless puns. Blood Orange closes the album with a stripped-down verse, and sophist-a-funk grandmaster Leon Ware adds soulful punch to three songs.

There are a few misses. “Do Girls” devolves into an emotional voicemail, and uncomfortably breaks up the highly enjoyable succession of “Can’t Stop,” “Get Me Right,” “Heartbreaker” and “Tribe.” Meanwhile, “Smoke (Interlude)” runs repetitive and is surprisingly straightforward on an otherwise unpredictable project. But the handful of misfires doesn’t overshadow the powerful, radio-ready mixture of pop, Hip Hop and R&B that dominates Vibes. Time off, a tighter central theme and spirited assists from some legendary producers makes Theophilus London’s second full-length his best yet. What’s being escaped is up to you, but Vibes succeeds in getting its listener to flourish in a world of champagne toasts, faceless women and impulsive dancing.