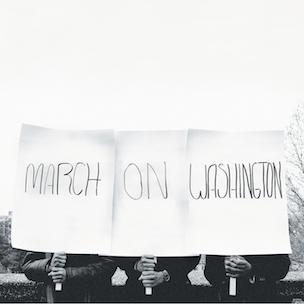 About two-thirds of the way through Diamond District’s “March On” intro, guest emcee/poet Asheru addresses the enigmatic nature of Washington D.C. and its inhabitants, saying, “No statehood, but we live in a police state / It’s the push and pull that allows us to be great.” He could just as easily be talking about Diamond District themselves. The title of their latest work, March On Washington, evokes imagery of the Civil Rights struggle and the mentality of the following decades inherited from the likes of Public Enemy, but Diamond District is equally adept at carrying on in the tradition of A Tribe Called Quest or providing battle ready bars.

Granted, rhyming about one’s rapping prowess and how competition fails to measure up are pretty much a standard in Hip Hop, and to be sure Uptown XO and yU can provide them in abundance. But that particular facet of their respective skill set may be the least entertaining aspect of the album. The track “These Bammas” serves as a dissertation on what the group interprets to be the depressed state of mainstream Hip Hop, but its also a microcosm of March On Washington. For those dissatisfied with Top 40 Rap, yU’s criticisms of “slaves with invisible chains for minimum wage” are valid, but tend to sound redundant over the course of a whole song. When Uptown XO turns his criticism inward, rhyming, “Industry that’s afraid of some real talent / Shall I cater to niggas, or try to deliver balance,” the track truly shines.

The selling point for Diamond District has been following in the tradition of a grimy, East Coast sound. And while the trio excels at both paying homage to and continuing the evolution of boom bap, to confine them to only that sound sells them short. Oddisee displays his versatility behind the boards, whether providing bass-heavy tracks that allow Uptown XO and yU to display the intricate, combative rhyming found on “First Step” or “Bonus Flow.” But he also breathes new life into familiar samples like the clever flip of Marvin Gaye’s “Sexual Healing” on “Ain’t Over,” where the group addresses romantic relationships, friendships and their own journeys. These multidimensional, fully developed concepts showcase Diamond District calling out the corruption in their city (“Purveyors Of Truth”), the fallacies in the Rap game and the flaws within themselves. And they’re executed so well, they serve as a sort of leadership by example and conceptually superior alternative to the berating of nameless emcees on tracks like “These Bammas,” it becomes a bit of a mystery why they even bother with such criticisms in the first place.

March On Washington is a concise, diverse package. The labels and talk of boom bap are convenient for those that need to categorize things, but like Asheru’s description of the District of Columbia, the group resides in a space that finds them defying conventional definition. With their latest album, the ambiguity works in their favor.