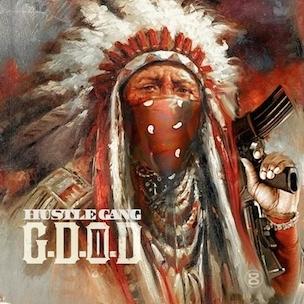 With a plucky, but uneven and largely ignored major label debut, T.I. used the mixtape hustle to strike a balance between his chart-topping aspirations and the talent that initially made him a hot commodity. But while the DJ Drama-assisted Gangsta Grillz Meets P$C In Da Streets provided the necessary career reboot, Tip’s record as an assembler of talent with P$C remained spotty at best. After debuting at the #2 spot with 2012’s Trouble Man: Heavy Is The Head and the pleasant surprise of 2013’s G.D.O.D. mixtape, a sequel to the latter provides T.I. the opportunity to beef up his Hustle Gang crew and build anticipation for his next scheduled retail release, Paperwork: The Motion Picture. While serviceable in spurts, G.D.O.D. II unfortunately does little on either front.

Very few if any of the tracks on G.D.O.D. II are patently bad. But despite enlisting a variety of producers, most of the songs are indistinguishable. The requisite driving bass and rolling snares are present with plenty of blips and synths. But with the exception of Polow Da Don’s horn-tinged “Welcome To My City” and Lil C’s trippy contributions, there’s very little innovation. Tip spends most of the mixtape breezing through double-time flows centered on pitching street pharmaceuticals, busting guns and running through women. It’s neither original nor introspective, but after eight solo albums, he can yawn through about 20 songs and still be entertaining on cruise control. The late Doe B’s slapstick verses are just as enjoyable as they were on the original Get Doe Or Die. And like T.I., his thick, Alabama drawl allows him to bend words that don’t usually rhyme, while referencing everything from popsicles to Jumanji. It’s not five-mic material, but he’s entertaining in the same way someone like Gucci Mane can make serving junkies sound humorous. Spodee provides some rare moments of reflection, and the always-game Young Dro is the only other Hustle Gang member to consistently distinguish himself from the pack by barking out comical lines like the following:

“I’ll have them pussy niggas takin’ off from the click-clack / Bow, get back / Break a nigga off like a Kit Kat / Where your bitch at, where the bricks at / You been in the gym workin’ out, oh I get that / Well you can catch six bullets in your six pack…”

Aside from the occasional highlight from B.o.B. and Trae Tha Truth, the rest of Hustle Gang and G.D.O.D. II’s guests generally blend into the background. Troy Ave pops up for some generic brick talk on “Money On My Mind,” and Trey Songz joins the rest of the crew in the stripper rescue anthem “Champagne Room,” which finds him wasting his vibrato trying to convince the listener strippers “need love too.” Even the reluctant owner of the summer’s biggest hit, Iggy Azalea, can’t escape the mediocrity with her claims of being “the only white girl with a ghetto ass and a pair of fashion titties” on “We Go Hard.”

With too many members of Hustle Gang proving unskilled enough to provide entertaining verses and virtually no emotional depth (see “Got Me A Check”), the second half of the mixtape plays out much like a Michael Bay movie. There are plenty of explosions and damsels in distress but no real substance. Equally troubling is the fact T.I. has historically been so adept at crafting songs explaining the legal and emotional consequences of trapping and detailing why he hit the block in the first place. Even when extending Tip the courtesy of separating his real life events from his raps, things hit a new low on “I Do The Most” when he rhymes, “Put it on Doe / Kill him and those he be puttin’ on for.” It’s rather coincidental that for all the talk of dope peddling, the bulk of Hustle Gang’s latest proves to be as fruitless as the high most garden-variety baseheads chase.